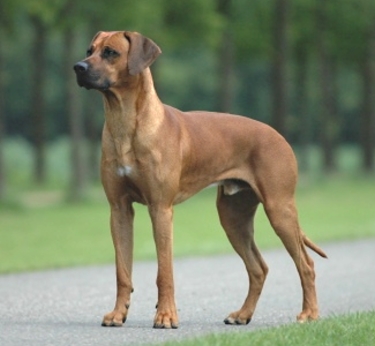 The Rhodesian Ridgeback is a large dog indigenous to South Africa that has a characteristic ridge of hair on his back which is grows forward. He is well balanced, muscular, athletic and handsome. The Rhodesian Ridgeback’s ancestors are traced back to half-wild hunting dogs belonging to the Hottentot tribes in the 16th century. Early European settlers to South Africa in the 16th and 17th centuries had with them several different breeds including Mastiffs, Salukis, Bloodhounds, Great Danes and Greyhounds. And, historians believe selective breeding with these breeds along with the Hottentot dog resulted in the development of the Rhodesian Ridgeback.

Rev. Charles Helm, Cornelius von Rooyen and Rhodesian breeders all played a role in today’s Rhodesian Ridgeback. In 1875, Helm traveled to Rhodesia (now known as Zimbabwe) and brought with him two of his hunting dogs. Cornelius von Rooyen, a big game hunter, borrowed them and was so impressed by their excellent ability to hunt lions (and not be killed), he started his own breeding program. Breeding continued in Rhodesia and in 1922, the first standard was written. While the Rhodesian Ridgeback was very popular in cornering lions for the hunter to kill, they were also used to protect families and property as well as in herding and hunting of other game. The Rhodesian Ridgeback can withstand the extreme changes of temperatures in Africa as well as go without water or food for an entire day.

The American Kennel Club officially recognized the Rhodesian Ridgeback into its Hound Group in 1955.

Weight: The weight of a Rhodesian Ridgeback dog is 85 pounds (37 kg) and for bitches 70 pounds (32 kg). These weights are considered desirable by the AKC.

Color: The color of the Rhodesian Ridgeback’s coat can be light wheaten to red wheaten. AKC Standard allows a bit of white on the chest and toes.

Temperament: The Rhodesian Ridgeback is intelligent, loyal, independent and calm natured. He is good with children, however, they should be supervised. This is a large breed which may unintentionally knock over a child. Not even Rhodesian Ridgeback puppies should be left alone with children since they have razor sharp teeth which could cause unintentional injury. The Rhodesian Ridgeback is very protective of his family, wary of strangers and is considered an excellent, natural watch dog. He learns quickly and does well with training which is done in a consistent, firm and very positive manner (never harsh). However, he can be stubborn when it comes to obedience and training. The Rhodesian Ridgeback needs daily exercise both for his physical and mental well being. This is a natural hunting breed and will take off on a scent, therefore it’s important to keep him in a very secured area or on a lease. 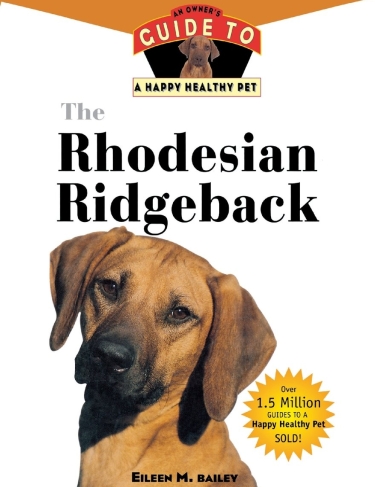