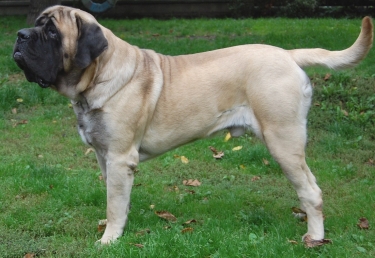 The English Mastiff (sometimes called the Old English Mastiff) is descended from the large, mastiff-type dogs brought to Britain as early as the 6th century BC, by Phoenician traders. The dogs were crossed with local fighting dogs and were used for hunting, and as fighters against bears, lions, bulls, and eventually dogs.

However, Mastiffs were most prized as a family guardian, courageous, yet devoted to their family; they maintained this popularity for over 2000 years in Britain, only to be reduced in numbers close to extinction after World War II and a breed census confirmed that there were only 8 dogs of breeding age left. With the help of a Canadian breeder who sent over puppies, the Mastiff was restored, and has again attained a high level of popularity.

Color: The basic description of the color of the Mastiff’s coat is ‘fawn, apricot, or brindle’ – according to the AKC Standard.

Temperament: The English Mastiff is a courageous and intelligent dog, yet gentle and biddable. It makes a wonderful companion in a setting with a good deal of space. As with all dogs that are giants at maturity, training should begin early during puppy hood.

Health Problems: Because of its deep chest cavity, the English Mastiff is at risk for gastric torsion (bloat). Epilepsy is highly suspected to have a genetic component in this breed. As with many large breeds, hip dysplasia may be a problem, and the life expectancy is short. They also tend to salivate and snore.

Special Interest: The English Mastiff is listed in the Guinness Book of Records as being the heaviest breed in general (tied with the Saint Bernard). 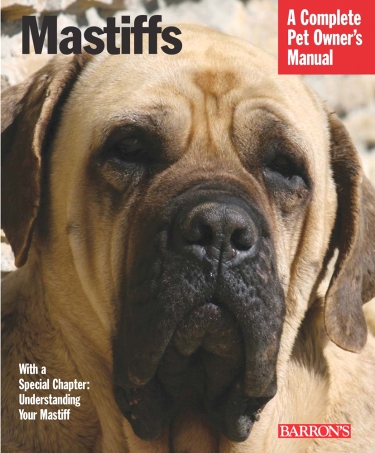