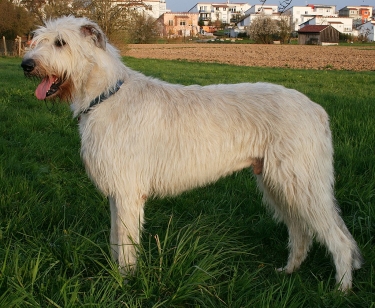 It’s understandable why one might be impressed or perhaps somewhat intimidated upon first glance of an Irish Wolfhound -their most distinguishing physical feature which is their great size, very rarely goes unnoticed. However, these massive dogs of commanding appearance are very sweet and calm natured, loyal and friendly.

Irish Wolfhounds are sight hounds descended from an ancient breed. They were most often used to hunt wolves, Irish elk, other large game and were also used in wars. The Irish Wolfhound almost became extinct by the end of the seventeenth century mainly because the animals they hunted eventually disappeared, therefore there was little demand for this breed.

As a result, large numbers of Irish Wolfhounds were deported to other parts of Europe. These dogs were often prized and given as gifts to royalty. Its revival is credited to Captain George A. Graham who started his work in 1862 and 23 years later, accomplished his mission and restored the breed. It is believed that Graham bred the Irish Wolfhound with the  Scottish Deerhound, Borzoi, Great Dane, Tibetan Mastiff, English Mastiff and other breeds.

The Irish Wolfhound was recognized by the American Kennel Club as a sporting breed in 1925.

Coat Type: Irish Wolfhounds have a double coat – the outer coat is harsh and rough and the under coat is soft. The hair on the body, legs and head is rough, hard and wiry. Hair over eyes and beard is long and especially wiry. Brushing or combing once or twice a week will help keep the coat in good shape. Irish Wolfhounds shed year round.

Color: The recognized colors for the Irish Wolfhound are gray, brindle, red, black, pure white, fawn, or any color that appears in the Deerhound.

Temperament: Irish Wolfhounds intelligent, sweet natured and loyal family pets. They do well with children – although one must be careful having small children near because of the this breed’s large size. They are fast learners, easy to train and respond best to positive training methods. Irish Wolfhounds are friendly dogs by nature, even with strangers – which keeps them from being defined as a watch or guard dog. Puppies under a year old should not get too much exercise (too taxing), but love to play freely. This breed needs to always be in a secure area and it’s important to know that since they are sight hounds, an invisible fence is not recommended – they need to see their boundary. They should never be tied up and left outside. Irish Wolfhounds want to be with you. Daily long walks are essential.

Health Problems: Health concerns for the Irish Wolfhound include: heart disease (one of the major causes of death), bloat and gastric torsion, liver shunt, cancer, Von Willebrands Disease (bleeding disorder) and hypothyroidism. Some of the less common health issues include: hip & elbow dysplasia, progressive retinal atrophy and seizures. The average life span of an Irish Wolfhound is 6-8 years. 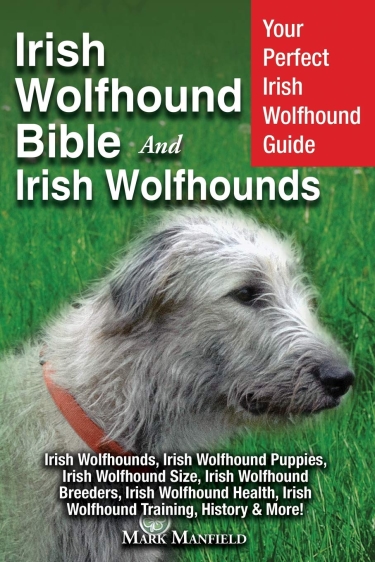