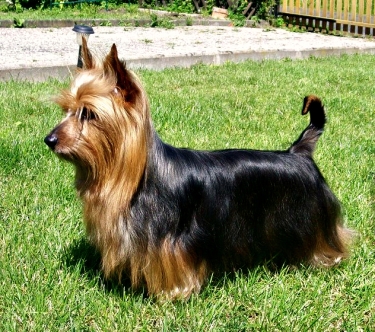 The Silky Terrier is a small type breed, low set and fine boned with a long blue and tan coat parted down the middle. In the late 1800s, breeders in Australia wanted to improve the color of the Australian Terrier’s blue and tan coat, therefore crossbred this breed with the Yorkshire Terrier.

Initially each litter produced some Silky Terriers, yet also Australian Terriers as well as Yorkies. The Silky Terriers were then bred together until the desired type was achieved. In both Sydney and Victoria, Australia, breed standards were written, although there were differences between the two. Eventually however, there was a meeting of the minds and the breed standard was unified in 1926.

Silky Terriers were brought to the United States -where they quickly became popular – by WWII servicemen who had been stationed in Australia. This breed has a characteristic trait of being keenly alert and they’re also known to be charming, lively and happy. While the Silky Terrier has always been an ideal companion, they are also known to hunt and kill small rodents.

The American Kennel Club recognized the Silky Terrier in the Toy Group in 1959.

Weight: The weight of a Silky Terrier is approximately 10 pounds (4.5 kg).

Coat Type: The Silky Terrier’s coat is long, fine, glossy, straight and silky. The coat should be brushed and bathed regularly.

Color: The color of the Silky Terrier’s coat can be all shades of blue and tan.

Temperament: The Silky Terrier is a very alert breed. He is also active, intelligent, affectionate and happy. Since this breed is eager to learn, it makes training easy. Training needs to start at an early age and should be consistent and firm with a lot of praise given. A Silky Terrier owner needs to be his leader at all times, otherwise behavior problems can arise. Socialization is also very important. Silky Terriers are good with older children, yet not recommended for younger ones. This active breed loves to take long walks, run and play. It is important to keep a Silky Terrier active and a part of your family, otherwise he will become bored which can negatively affect his behavior.

Health Concerns: The Silky Terrier is generally a healthy breed although some may be affected by luxating patella, hypothyroidism, Leggs Perthes, epilepsy and tracheal collapse. The average life expectancy for a Silky Terrier is 12 – 15 years.