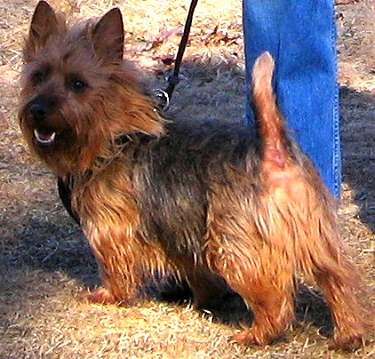 The Australian Terrier is a small, high-energy, lovable dog. While small in frame, this breed is very protective and makes an excellent watchdog.

The exact origins of the Australian Terrier are not known, however, it is believed it shares a common ancestry with these Terrier breeds developed in the 1800s – Cairn, Norwich, Irish, Manchester, Yorkie and Dandie Dinmont.

The Australian Terrier was developed in Australia in the 19th century. This new, rough-coated Terrier was used as a helper, a companion and for rodent and snake control. They were also prized for their watchdog abilities.

In 1868, broken-coated Terriers were shown for the first time in Melbourne. In 1887, the Australian Rough-Coated Terrier Club was founded in the same city with the purpose to standardize the breed. These dogs were then shown in 1899 as the Australian Terrier, Rough-Coated – colors noted in show records were sandy & red and blue & tan. By 1896 a standard for this breed had been established. England granted breed status in 1933 and the American Kennel Club admitted the breed in 1960.

Height: The height for an Australian Terrier is between 9-11 inches (23-28 cm.) Bitches are slightly shorter than dogs.

Weight: The weight for an Australian Terrier is between 9-14 pounds (4-6 kg.) Bitches weigh slightly less than dogs.

Coat Type: The Australian Terrier’s outer coat is rough and straight while the undercoat is soft and short. The length all over is about 2½ inches (6.4 cm), except the tail, lower part of the rear legs, pasterns and the feet which are kept free of long hair. The length on the ears is kept very short. The neck has a lot of hair which frames the face. The Australian Terrier has a topknot which is of a finer and softer texture, covers only the top of the head. The breed standard specifies the coat should be untrimmed, however, some prefer to do so anyway for a neater appearance for the show ring. Grooming maintenance is minimal – the coat only needs to be brushed several times a week. The Australian Terrier sheds very little or not at all.

Color: The color of the Australian Terrier’s coat can be blue & tan, solid sandy, and solid red.

Temperament: The Australian Terrier is very friendly, loyal, protective, and it makes a great companion. This breed has a very keen sense of hearing and vision making it a great watchdog. It does best inside the home with the family and not outside for long periods of time. Australian Terriers instinctively dig and they love to chase squirrels, cats and rabbits. This lively, curious and lovable dog is good with children, but should not be teased. As for obedience training, it does well, but training must be strict and consistent since Australian Terriers has a mind of its own. 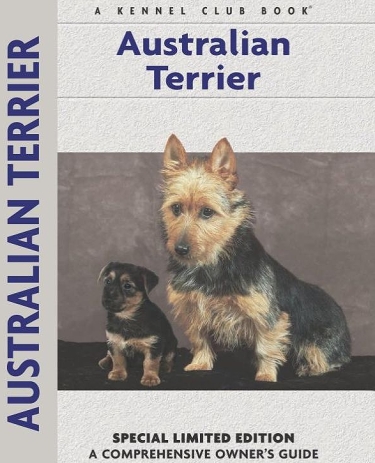