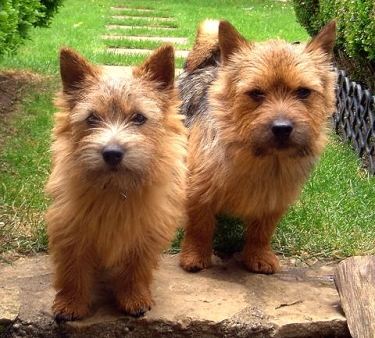 The Norwich Terrier is a feisty and fearless sturdy dog measuring no more than ten inches at withers. He is lovable, friendly, good natured and thrives on human companionship. The Norwich Terrier comes from the East Anglia region in England where he was used primarily as a ratter as well as to hunt other small vermin. (Norwich is the nominal capital of this region.)

Norwich Terriers were also later used to bolt foxes during a hunt. This particular type of dog has been around since at least the late 1800s and it is believed possible ancestors might include the Irish Terrier, Trumpington Terrier, red terrier and other terrier breeds.

Height: The ideal height for a Norwich Terrier “…should not exceed 10 inches at the withers” according to the AKC breed standard. (10 inches = 25.4 centimeters)

Coat Type: The Norwich Terrier has a double coat. The outer coat is lies close to the body and is wiry, hard and straight. The Norwich Terrier’s undercoat is soft. Medium in length and shaggy and is more pronounced around the neck and shoulder forming a mane. Grooming is minimal – the coat should never be clipped, just tidied so that it appears as natural as possible. Basic maintenance for the Norwich Terrier coat includes brushing daily or weekly with a steel comb. The Norwich Terrier is a light shedder.

Color: The color of the Norwich Terrier coat varies and can be any shade of wheaten, red, black and tan or grizzle (gray or grayish).

Temperament: The Norwich Terrier is active, affectionate and very intelligent. He is rarely aggressive and generally does well with other pets as long as they have been socialized with them. Norwich Terriers are good natured and love people – including children – and do not shy away from strangers. However, he will bark at those he does not know making him a good watch dog. He is sensitive and responds best to positive training methods. Norwich Terriers want to be with people and not left outside for long periods where they can quickly become bored and start digging and / or barking. This breed as with any terrier can be stubborn, independent and dominant, therefore it’s extremely important for any owner to understand he must always be seen as the leader. Daily walks and free play with your Norwich Terrier are perfect for exercise and stimuation. 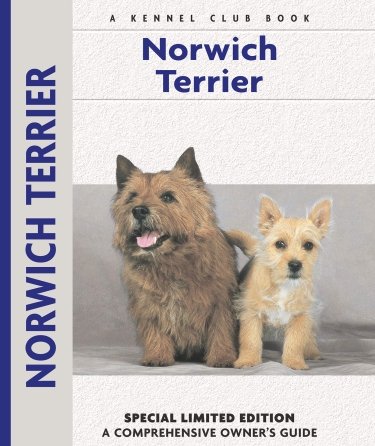