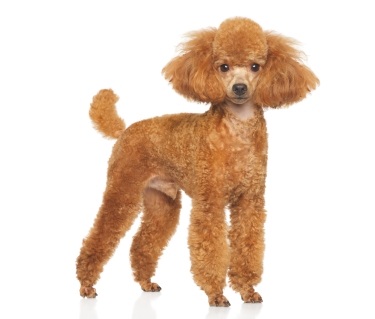 Sandwiched in size between the Standard Poodle and Toy Poodle, the Miniature Poodle was the second to be bred. Despite its smaller size, the Miniature Poodle shares many of the the same characteristics as the Standard including the ability to hunt and the fact that Poodles are ranked the second most intelligent dog breed just behind the Border Collie.

The Miniature Poodle is skillful in many dog sports and activities, including agility, obedience and circus performing.

In 2014, the American Kennel club opened their Hunt Test program to Miniature Poodles and in 2017 both the Standard and Miniature were declared eligible for American Kennel Club Spaniel Tests, a program designed for testing dogs with flushing capabilities.

Typically, a Miniature Poodle will be the smallest dog in the field as it weighs less than 25 lbs or 10 kg, less than the Boykin Spaniel, the former smallest dog, which weighs closer to 35 lbs or 16 kg. Hunters in the US and Canada have found the Miniature Poodle very useful for woodcock, chukar, mallards, and smaller ducks like the green-winged teal and bufflehead. Their smaller size allows them to get at corners and brush that retrievers cannot or where the bramble is too thick for cocker spaniels.

Coat Type and Color: The Miniature Poodle only grows a single coat of long and thick, curly or wavy fur and is hypoallergenic. They are typically a single solid color such as Apricot, Black, Blue, Brown, Cream, Gray, Red, Silver, Silver Beige and White.