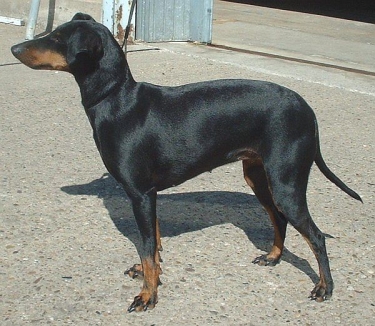 Manchester Terriers come in two varieties – Standard and Toy and the only differences are their ears and sizes. The Standard calls for folded, erect or cropped ears, yet the Toy variety has only naturally erect ears. As for size, the Standard should be between 12 and 22 pounds, while the Toy must not exceed 12 pounds. Manchester Terriers are muscular, sturdy, sleek, smooth-coated and elegant.

John Hulme of Manchester, England is credited for developing the breed by crossing a Whippet with a cross bred terrier. The breed was primarily used for ratting – for both health and sanitation purposes as well as in competition and sport. Manchester Terriers proved to be experts in their field.

The first Manchester Terrier was recognized by the American Kennel Club (AKC) in 1887. Both varieties were originally classified as two separate breeds with the AKC, however, in 1959 they were grouped together as one breed – two varieties – Toy and Standard.

Height: According to AKC Standard, the height of a Manchester Terrier when measured from the ground to the highest point of the withers, should be slightly less than the length.

Coat Type: The Manchester Terrier’s coat is short, dense, glossy and firm in texture. The coat is easy to maintain – very little grooming is required – just a periodic brushing. Standard Manchester Terrier is an average shedder while the Toy variety barely sheds at all.

Color: The Manchester Terrier’s coat is jet black and a rich mahogany tan. These two colors should have definitive lines of separation and not blend.

Temperament: Manchester Terriers are devoted, high spirited and willing to please its owner. They are intelligent and learn quickly. It is very important this breed is thoroughly and properly trained / socialized as a puppy otherwise they may show aggression. Manchester Terriers must always view their owner as its leader and children need to be capable of leadership skills. This breed does not like to left alone for long periods – they will become bored and might show disruptive behaviors such as excessive barking. Manchester Terriers thrive on attention and affection and want to be with their owner or family. They can be independent and headstrong. The Manchester Terrier needs daily exercise such as long walks or jogging in addition to play time which are all recommended. 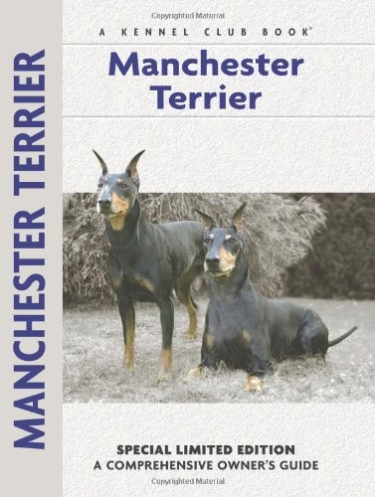