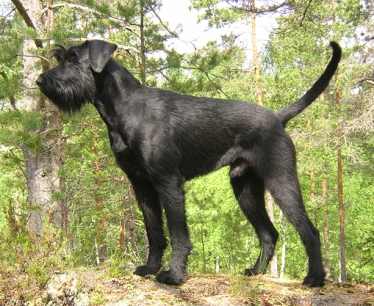 The Giant Schnauzer is an alert, large, sturdy and powerful dog with a distinctive beard and eyebrows. This breed, known to be a great cattle and driving dog, originated in an agricultural area of Germany where raising sheep and livestock is largely common. The German Schnauzer is the largest of the three Schnauzer breeds.

According to a 1928 English edition of German Dogs in Word and Picture, E. von Otto indicates the ‘bear Schnauzer’ of Munich as the Giant Schnauzer’s ancestor. The bear Schnauzer had long, shaggy hair and was related to the Old German shaggy shepherd dog. However, because of the desire to make the hair shorter, black and a larger body, the breed was crossed with the black Great Dane. It is also believed the Giant Schnauzer was crossed with the Bouvier des Flandres and the Standard Schnauzer.

Coat Type: The Giant Schnauzer has a weather resistant double coat – the outer being hard, wiry and very dense while the undercoat is soft. This breed sheds very little and is fairly easy to groom. It is common misconception that Giant Schnauzers do not shed at all.

Color: The color of the Giant Schnauzer’s coat is solid black or pepper and salt.

Temperament: Giant Schnauzers are highly intelligent, sensitive and very territorial. This breed is fiercely loyal to its family and is a natural guard dog. Giant Schnauzers should not be ignored or left alone for long periods of time – they need to be a big part of the family – which makes them best suited for those who will spend a lot of quality time with them. The owner must consistently show leadership and others in the family must also show they are ‘higher up in the pack’ from their pet. Giant Schnauzers should be socialized at an early age and obedience training is important. These dogs respond to praise and should never be harshly reprimanded. As a working dog, this breed learns quickly. Giant Schnauzers are very energetic and need plenty of vigorous exercise.

Special Interest:
• Giant Schnauzers at one time were also referred to as Munchener. The German name Riesenschnauzer means “the giant.”
• The German Schnauzer is the largest of the three Schnauzer breeds – the other two being the Miniature Schnauzer and Standard.
• Giant Schnauzers are used for police training and as army service dogs in part because they are easily trained, highly intelligent and have a keen nose. 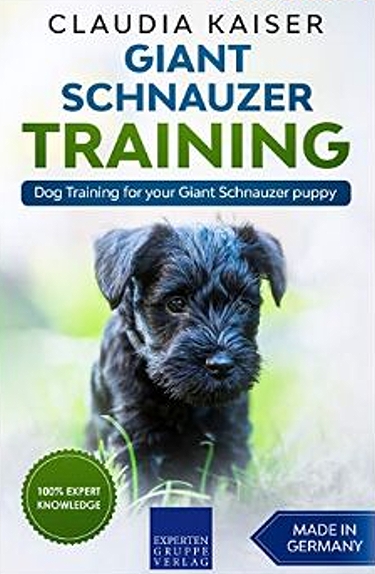