The Large Münsterländer (German: Großer Münsterländer) is basically the black and white version of the German Longhaired Pointer. It is a versatile hunting-pointing-retrieving (HPR) breed that originated in the region around Munster, Germany in the late 19th century.

Over forty years later, in 1919, a meeting of enthusiasts gathered in Munsterland Westphalia to register and set the standard for a new breed. They decided on the name Large Münsterländer and registered 83 black and white descendants of the unwanted 19th century puppies.

Though the Large Münsterländer shares its name with the Small Münsterländer, and is from the same region, they are not related. 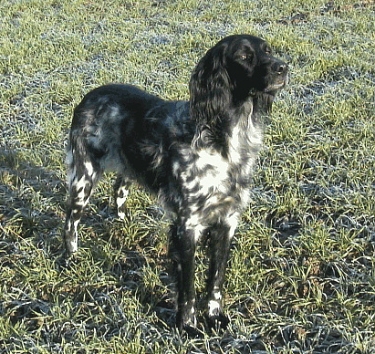 Health: Healthy breed. Some may be susceptible to hip dysplasia. cataracts and osteochondrosis.

Special Interest:
• One litter was whelped by Benno Fisher at the home of Adolf Hitler.
• Only six litters survived WWll.
• Was introduced to North America by Kurt von Kleist in 1966.

I LOVE MY LARGE MUNSTERLANDER