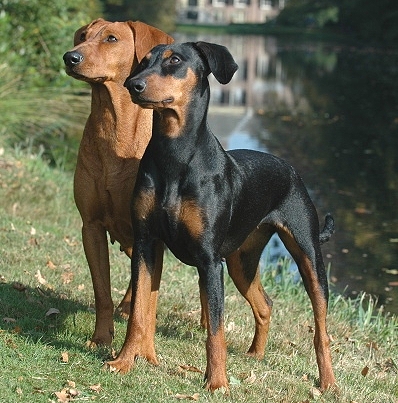 The German Pinscher originated in Germany and descended from early European herding and guardian breeds. They have a natural hunting ability and strong desire to protect. German Pinschers were used mostly to hunt vermin and to protect the home and family. This breed is included in the origins of the Miniature Pinscher and other Pinscher types including the Doberman Pinscher.

The survival of the German Pinscher was severely threatened due to both World Wars and from 1949 to 1958, no new litters were registered in West Germany. The reason the breed exists today is credited to Werner Jung and his successful efforts in 1958 to save these dogs.

German Pinschers arrived in the United States in the late 1970s – early ’80s and became the American Kennel Club’s 149th breed. The German Pinscher Club of America, Inc. was formed in 1985 and is the only National German Pinscher Breed Club recognized by the AKC.

Color: The color of the German Pinscher’s coat is fawn to red in various shades to stag red (red with intermingling of black hairs), black and blues with red/tan markings. Rich vibrant medium to dark shades of red is desirable. (AKC).

Temperament: German Pinschers are very intelligent, lively, and have an evenly tempered nature. These dogs make a great companion, they are alert and have a natural instinct to protect also making them an excellent watch dog. In training, they consistency, leadership, respect and patience from their owner. The German Pinscher must be part of the family and should not be ignored or treated harshly. They are not recommended for small children (under the age of 9).

Health Problems: There are only a few health issues of concern within the German Pinscher breed which include hereditary cataracts, hip dysplasia, cardiac disease, immune problems and von Willebrand’s Disease (blood disorder).

Special Interest:
• In addition to the colors of the German Pinscher today, in 1959 pure black and salt n’ pepper were included (more associated with schnauzers). These colors became extinct after WWI and II.
• In Germany, the German Pinscher was also known as the Standard Pinscher. 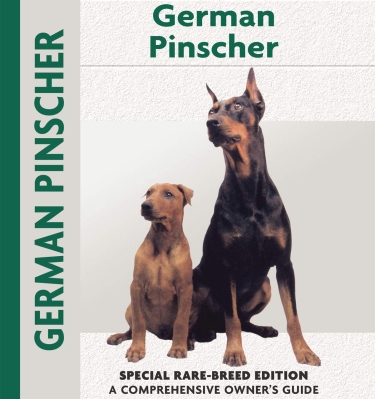