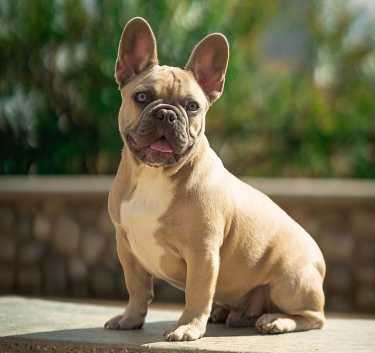 French Bulldogs are sturdy, compact, heavy boned and muscular. They have a short face, a snub nose and perky ears which resemble bat ears. They appear alert, interested and intelligent.

While there are a few theories which exist surrounding the origins of the French Bulldog, it appears it all began in England. Around 1860, it is thought that workers from England traveled to France seeking jobs. They brought with them their smaller bulldogs known to be excellent ratters and loyal family companions. It is likely these dogs were of the toy variety of the English Bulldog since they were largely popular in England at the time. These toy Bulldogs were mixed with various breeds in France (including French Terriers) and were recognized as Boule-Dog Francais.

Intense controversy swirled around the two different types of ears these dogs had – rose ears and bat ears. Europeans favored the rose type while the Americans opposed it and steadfastly favored the bat type. Ultimately, the Americans won and it is these ‘bat type’ ears which is one of the French Bulldog’s most distinctive key features (along with its skull).

The first club devoted to the French Bulldog was created by the Americans in April of 1897. Their members were wealthy men of prominent social standing. The dispute over English Bulldog’s ears was the reason for this club’s formation and because of the intense controversy, media coverage thrust the English Bulldog into the spotlight helping to make this breed ever more popular.

Weight: The weight of a French Bulldog should not exceed 28 lbs (13kg) – which is according to the American Kennel Club’s and the Canadian Kennel Club’s standards. The general weight range for this breed is between 20lbs and 28lbs (9.07kg – 13kg).

Coat Type: The French Bulldog’s coat is short, smooth, moderately fine, soft and glossy. Skin is soft and loose and is more concentrated around the shoulders and the head, forming wrinkles. Grooming is minimal and only require regular brushing. The French Bulldog is an average shedder.

Temperament: French Bulldogs are sociable, playful, lively and intelligent. These well-behaved, companion dogs are good with children (although they may play too rough for small children), other pets and strangers. They have a happy-go-lucky attitude and love to clown around. French Bulldogs do well in an apartment and generally require just a daily walk for exercise. They should not live outdoors. French Bulldogs thrive on human companionship and should never be ignored. The owner must always show leadership.

Health Problems: French Bulldogs are generally the healthiest of the Bulldog breeds although they are prone to congenital diseases and conditions. Some health issues and concerns include: Von Willebrand’s disease (VWD), a bleeding disorder which can impede clotting, thyroid condition, several eye issues (Cherry eye, or reverted third eyelid, Glaucoma, retinal fold dysphasia), several esophageal disorders and malformations and back and spinal diseases. Because of the French Bulldog’s flat face, they are more prone to suffer from brachycephalic syndrome which can lead to respiratory difficulties. Life expectancy for a French Bulldog is between 10 – 12 years.

Special Interest:
• French Bulldogs have also gone by the name Boule-Dog Francais.
• French Bulldogs were popular with streetwalkers as well as the wealthy.
• The French Bulldog Club of America was the first club in the world created for this breed
• A French Bulldog traveled aboard the doomed Titanic and was insured for $750 – which was considered an astronomical amount at that time. After the ship sank, the dog was seen paddling in the icy water, but did not survive.