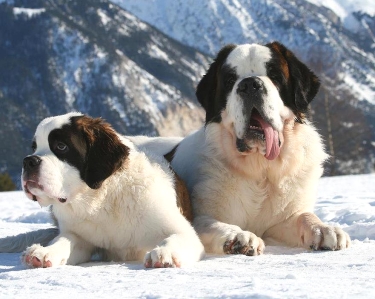 The Saint Bernard, often referred to simply as the Saint and best known as the gentle giant, has been bred in Switzerland since the 17th century. This Swiss breed is named after St. Bernard of Menthon, who lived from 996 to 1081, and who founded the Hospice at the pass between Italy and Switzerland.

For the past several hundred years, the St. Bernard dogs have lived at the Hospice and helped the monks search for and aid lost travelers. The powerful breed was also used in local villages to pull carts of food and supplies. By the mid to late 1800s, the breed was internationally recognized and its popularity began to spread.

While the St. Bernard enjoys a cold, snowy winter, they are also well-adapted to warmer climates. The Saint Bernard should have daily exercise and plenty of room.

Coat Type: Shorthaired and longhaired; the original St. Bernard was a shorthaired dog. The rough coat or longhaired dog emerged in the early 1800s. The Saint Bernard’s longer coat requires more grooming than the shorter coat, to avoid matting.

Color: The coloring of the Saint Bernard’s coat is generally tan or red markings on tail, back and head, with white required on underbelly, legs, chest, neck, tail-tip and muzzle; the mask on the face is desirable but not required; half-mask or no-mask dogs are not faulty.

Temperament: The Saint Bernard is a gentle, loyal dog with a sweet disposition. Although strong and powerful, they are generally calm and not overly zealous at play. Saint Bernards are excellent with children, but as with all giant breeds, should be supervised at play, and should have their training started early as a puppy.

Health Problems: Saint Bernards can be affected by hip dysplasia, a short life-expectancy (seven to nine years), and entropion. Because of its deep chest cavity, the Saint Bernard is at risk for gastric torsion (bloat). Epilepsy is highly suspected to have a genetic component in this breed.

Special Interest: Monks at the Hospice du grand St. Bernard used the dogs to rescue more than 2500 travelers lost in the snowy Alps. 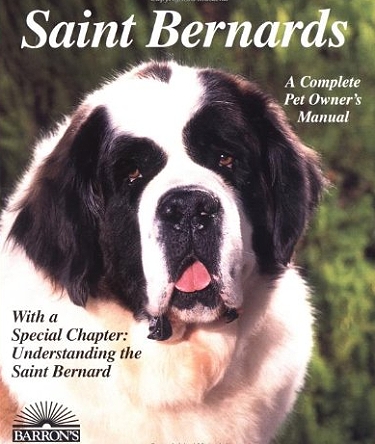