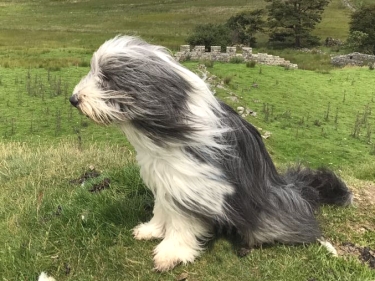 The origin of the Bearded Collie may have come from the Magyar Komondor of Central Europe, however, there is also a theory this breed descended from the lowland Polish Sheepdog. To support this theory, documented records indicate that in 1514, Polish traders brought two lowland Polish Sheepdogs to Scotland. But, it is just a theory that suggests these dogs were then bred with local Scottish dogs to produce the Bearded Collie.

The first documented description of the Bearded Collie breed was not published until the early 19th Century.

The Bearded Collie is an energetic and devoted herder of sheep and cattle in the rough terrain of Scotland. Known as Highland Sheepdog, the Highland Collie, and the Hairy Mou’ed Collie, it was also nicknamed Beardie and is one of Britain’s oldest breeds.

In the early part of the 20th Century, the Bearded Collie just about disappeared. However, after WWII, Mrs. G. 0. Willison, owner of the Bothkennar Kennels was fascinated by the these dogs started breeding them for show purposes. In 1955, she established the Bearded Collie Club in Britain. Once the Kennel Club in England accepted the breed, its popularity began to increase. Bearded Collies were introduced to the United States in the 1950s, but none were bred. It was not until 1967 the first litter of Bearded Collies were bred in the US.

Height: The height for a Bearded Collie is 20-22 inches (51-56cm.) Females are just a little shorter than males.

Coat Type: The Bearded Collie has a long, shaggy coat which protects against wet and cold weather. The outer coat is harsh and shaggy while the undercoat is thick and soft. The length of the coat is longer on the lower lip, cheeks and under the chin and lengthens toward the chest. This creates the characteristic beard of the this breed. The Bearded Collie is an average shedder. Daily brushing (not combing) is necessary in order to help prevent matted hair.

Color: The color of the Bearded Collie’s coat can be lack, brown, fawn, blue; with or without lighter markings. Tan trim may occur on all colors.

Special Interests: The Bearded Collie can be seen in a 1771 Gainsborough portrait of the Duke of Buccleigh as well as a 1772 Reynolds portrait. These portraits are the earliest known pictures of this breed.