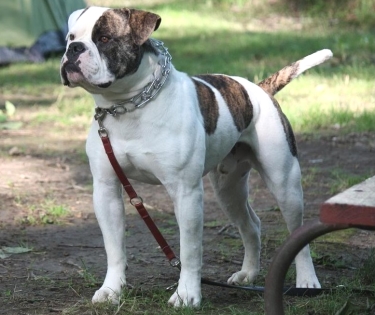 Descended from the extinct Old English Bulldog, who was brought by working class immigrants to the American South in the 17th century, the American Bulldog was used for cattle-driving, bull-baiting, farm dogs, butcher’s dogs and guard dogs on plantations.

The most important role that guaranteed the American Bulldog’s survival, especially in the South, was the breed’s ability to hunt and kill feral pigs. Introduced into the New World by Spanish Conquistadors, the feral pig had no predators and the animals were notorious for destroying crops.

Nevertheless, by World War II, the breed was near extinction. John D. Johnson traveled throughout the Deep South looking for the best specimens to revive the breed. Alan Scott grew an interest in Johnson’s dogs and worked with him on the revitalization process. Scott bred non-Johnson catch bulldogs from Southern farms with Johnson’s lines, creating what is now known as the Standard type American Bulldog (Scott type). Johnson crossed his original lines with an English bulldog from the North creating the Bully type American Bulldog (Johnson type or Classic type).

Temperament: The American Bulldog should never be left alone, bored, in a house or garage for long periods of time, as it may become fearful and aggressive towards things it does not know or understand. This is a large breed that must not become a frog in a well that only knows its home territory and it must be trained out of the dog immediately if the dog is obtained past the age of 18 months. American Bulldogs are a known breed that will destroy furniture and shoes if they are not given enough to do and this is yet another reason too much isolation is disastrous for this breed.

Fear- or aggression-causing triggers can include other dogs, children, postal workers, and strangers. An American Bulldog must learn what is a threat and what is not, and a dog of this breed must learn when to be territorial and when everything is clear. Its temperament is similar to the Rottweiler.

Health: American Bulldogs generally live from 10 to 16 years, and tend to be strong, physically active, and often healthy. Some health problems in American bulldogs are often found within certain genetic lines, and are not common to the entire breed, while others, such as neuronal ceroid lipofuscinosis (NCL), Ichthyosis, disorders of the kidney and thyroid, ACL tears, hip dysplasia, cherry eye, elbow dysplasia, entropion, ectropion, and bone cancer are more common to the general population of American Bulldogs.

There are DNA tests available to help breeders screen breeding animals for NCL (neuronal ceroid lipofuscinosis) and Ichthyosis. A Penn Hip (Pennsylvania Hip Improvement project) or OFA (Orthopedic Foundation for Animals) screening is recommended for all potential breeding animals. Some American Bulldogs are prone to allergies. 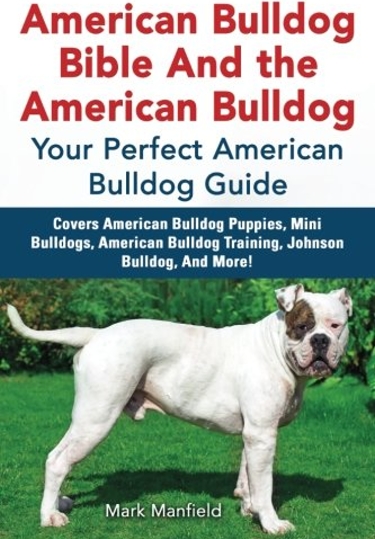