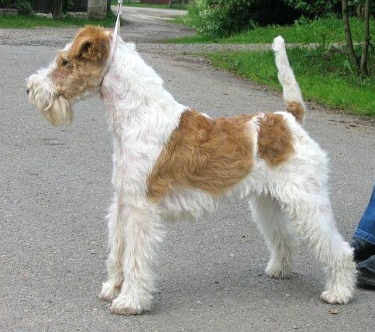 The Wire Fox Terrier originated in England in the 18th century and was used in hunting to ‘go to the ground’ and drive foxes out from hiding in their lair. They were also used as ratters. It is believed the black-and-tan working terrier of Wales, Durham and Derbyshire – all which were rough coated – are ancestors of the Wire Fox Terrier. The first breed standard was written in 1876 in Great Britain by the Fox Terrier Club.

There were two varieties of this breed – the Wire and the Smooth type. Both types were recognized by the American Kennel Club in the Terrier Group in 1885. However, the two were officially separated as different breeds which became effective in 1985.

Height: The maximum height for a Wire Fox Terrier is 15½ inches (39 cm) tall at the shoulder. However, females can be a bit shorter, as long as they are in proportion and balanced.

Coat Type: The Wire Fox Terrier has a rough, broken, very dense and wiry coat. The hair appears to be twisted, or wavy, but never curly. The undercoat is shorter, finer and softer. Basic grooming of the Wire Fox Terrier’s coat involves regular brushing with a firm bristle brush which will help eliminate matting. In addition, clipping and stripping need to be done on a regular basis. The Wire Fox Terrier is a minimal shedder.

Color: The color of the Wire Fox Terrier’s coat is mostly white with black or tan markings.

Temperament: The Wire Fox Terrier is active, friendly, curious and affectionate. This entertaining and playful breed makes a wonderful family pet and is great with children (although some suggest it’s best with older kids). A Wire Fox Terrier thoroughly enjoys being with his family and thrives in their company. That being said, these dogs should not be left alone for long periods because they may then start to develop behavior problems. The Wire Fox Terrier needs to have an assertive, confident and very firm master. This is a very intelligent breed that is easy to train, but he needs to know his owner is his pack leader. Training should be done in a positive manner and never should be harsh. Wire Fox Terriers need to be well socialized and properly introduced to other animals. They are usually fine with other non-aggressive large dogs, but will not back down if approached by one that is aggressive – no matter the size. It is very important to properly introduce other small pets to the Wire Fox Terrier when they are a young age, otherwise, they may be seen as prey. This is a high energy breed which needs daily exercise for both his physical well being and to keep him mentally stimulated. Be sure to keep your Wire Fox Terrier either on a leash or in a secure area, since his natural hunting instinct will lead him in the direction of an inviting scent. Also be forewarned, this breed loves to dig as this is also one of his natural instincts.

Health Concerns: The Wire Fox Terrier is a healthy breed and can live a long life with proper care. Some health issues which may affect this type breed include epilepsy, cataracts and deafness (in those with predominantly all white coats). Wire Fox Terriers can also be affected by luxating patellas, Legg Perthes disease and can suffer from post nasal drip. The life expectancy of a Wire Fox Terrier is up to 15 years, although some can live several years longer.

Special Interest:
• The first breed standard for the Fox Terrier was approved in 1876 by The Kennel Club, although at that time the Smooth and Wire type were classified as one breed. The two varieties were separated as different breeds in 1984 – yet effective in 1985 which is exactly 100 years since recognized by the American Kennel Club. 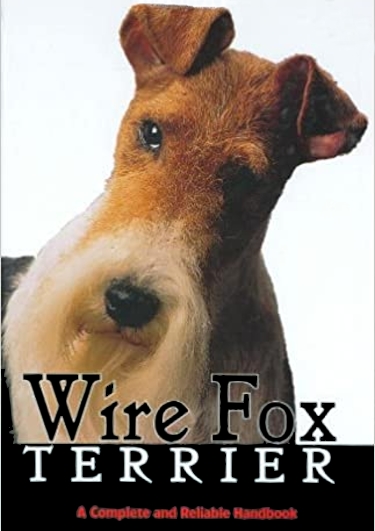