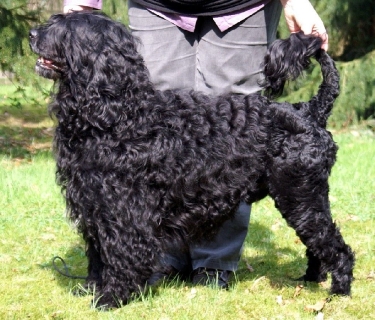 The Portuguese Water Dog is medium sized, well muscled and has either a wavy or curly coat. There are also two different clips, a retriever clip which is when the entire coat is trimmed to no more than an inch long. The lion clip is when the hair is trimmed very short on the muzzle and just below the mid-section to the hindquarters. This type of clip is said to help aid the dog while swimming.

The Portuguese Water Dog is an ancient breed that originated in Portugal, possibly as far back as 700 B.C. At one time, they were found all over the Portugal coast, but later due to changes in fishing methods, they were located primarily in the Algarve region. Possible ancestors include the Kerry Blue Terrier, current day Poodle and the Irish Water Spaniel.

The Portuguese Water Dog is excellent fisherman’s companion. These working dogs are trained to retrieve fish and tackle, guard, dive and act as a courier between ships. They have great stamina and are known to work very long days – never tiring and always happy to complete a task for his master.

The first Portuguese Water Dog was brought to the United States by Deyanne and Herbert Miller in 1968. The Portuguese Water Club was founded in Connecticut in 1972 and the breed was officially recognized by the American Kennel Club in the Working Group in 1983.

Coat Type: The Portuguese Water Dog has a very thick coat. There are two types: wavy and curly. The wavy type is longer, has a slight wave (no curls) and has a bit of a sheen. The curly type is lackluster and dense with tight cylindrical curls. The coat is abundant all over the Portuguese Water Dog’s body except for underarms and groin where it is thinner. The Portuguese Water Dog is a single coated breed and sheds very little. Grooming is involved. The coat will continue to grow, so it must be trimmed about every two months. There are two clips: retriever cut and the lion cut. In addition, to maintain the coat, it’s important to brush the coat at least every other day which also helps to prevent matting.

Color: The color of the Portuguese Water Dog’s coat can be “black, white, and various tones of brown; also combinations of black or brown with white.” AKC Standard. 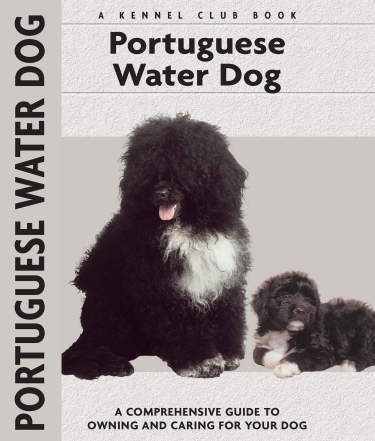