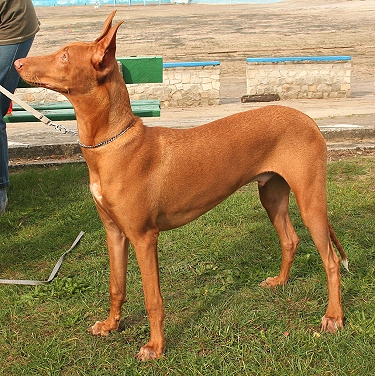 The Pharaoh Hound is muscular and powerful yet elegant and graceful in appearance. These dogs have an ancient Egyptian history dating back possibly to 3000 B.C. making them one of the oldest domesticated dog breeds in the world. It is thought that long before the birth of Christ, Phoenician traders brought them to Malta, an island nation off the coast of Sicily, Italy in the Mediterranean Sea.

Breeders in Malta were diligent in keeping the breed pure. Even today the Pharaoh Hound is free from many genetic diseases as a result of very responsible breeding.

Pharaoh Hounds have a keen sense of sight, sound and scent and were primarily used in teams to hunt rabbits in Malta and its neighboring island, Gozo. The first Pharaoh Hound was brought to the United States in 1967 by Ruth Taft Harper with the help of Pauline Black and her husband General Adam Black. The American Kennel Club recognized the registration for the Pharaoh Hound in 1983 and the breed was entered into Regular Classes in 1984.

Color: The color of the Pharaoh Hound’s coat can vary from red to and tan including all shades of these two. According to the AKC Standard, these white markings are permissible – on the chest (White Star), toes and a slim white snip on center line of face.

Temperament: The Pharaoh Hound is intelligent, active and affectionate. He makes a great family pet and does well with children – which he is already accustomed to. If your Pharaoh Hound is not used to being around children, he should be properly introduced. Also, keep in mind that this breed is very sensitive regarding his eyes – do not cover or put your hands near them. The Pharaoh Hound is very alert and barks when something is out of the norm, making him a good watch dog. Although he can be wary of strangers, he is rarely aggressive. This breed does well with training which is done in a positive manner. Pharaoh Hounds can be sensitive, independent and stubborn. They do well with other dogs and animals when properly introduced, however, some claim he will still need to be supervised when around small pets. As an active breed, the Pharaoh Hound needs daily exercise such as long runs, walks and even sprinting. The Pharaoh Hound is a natural hunting dog, so caution must be exercised if he is not on a leash as he may sprint off toward an irresistible scent.

Health Concerns: The Pharaoh Hound is very healthy, hardy and generally free from many genetic diseases thanks to devoted and responsible breeders. Some issues which breeders keep an eye out for include luxating patellas, hip dysplasia, and eye conditions. The average life span for a Pharaoh Hound is between 12 – 14 years.

Special Interest:
• The Pharaoh Hound is the national dog of Malta where it is referred to as Kelb tal-Fenek which means ‘dog of the rabbit’ or ‘rabbit hound’.
• The Pharaoh Hound is born with blue eyes, however while still a puppy, the color then changes to light gold or yellow and eventually then darker as he matures.
• The Pharaoh Hound actually ‘blushes’! When he is excited or very happy, both the inside of his ears and his nose turn a pinkish color. Pharaoh Hounds also have the ability to smile. 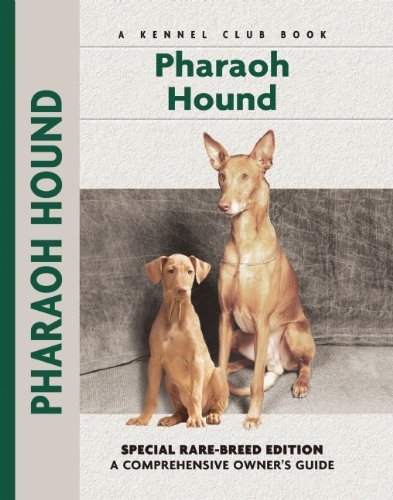