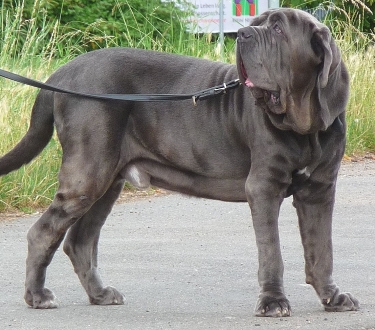 A Neapolitan Mastiff is majestic, massive and powerful. He is a natural guard dog that is muscular, heavy boned and rectangular in shape. The breed is most notably known for his enormous size and for his loose skin covering the body with an abundance of wrinkles and folds on the face and under the throat forming a large dewlap. Although the Neapolitan Mastiff is beastly and vicious in appearance, he is actually very calm, steady, affectionate and with proper training and socialization, a good family pet.

There are different theories regarding the specific ancestry of the Neapolitan Mastiff, however, it is almost certain he is a direct descendant of the Roman Molossus which was created by Alexander the Great (356-323 BC). In Italy where the Neapolitan Mastiff breed was developed, these dogs were used to protect both people and property. They were also used for dog fighting and by the Roman Army for which they were known to be giant war dogs.

While the Neapolitan Mastiff’s lineage is certainly ancient, the breed was not officially recognized until 1949 by the Fédération Cynologique Internationale (FCI). Neapolitan Mastini were bred to guard people and property – tasks they are still performing today.

Weight: According to AKC Standard, the average weight for a mature Neapolitan Mastiff male is 150 pounds and for females, 110 pounds, however, greater weight is acceptable (“usual and preferred”) “as long as the proportion and function are maintained.”

Coat Type: The Neapolitan Mastiff’s coat is dense, hard, smooth and short. The length is the same all over the body – about one inch. Extra care should be given to keep the folds and wrinkles dry since moisture can become trapped, otherwise, grooming of the coat is minimal. The Neapolitan Mastiff is an average shedder.

Color: The color of the Neapolitan Mastiff can be solid coats of gray (blue), black, tawny and mahogany. The coat can also be lighter and darker shades of these colors. Any brindling must be tan. Solid white markings can be found on these parts of the body: chest, underside, backs of the pasterns, toes, penis sheath, throat area from chin to chest and white hairs may be found on the back of the wrists (AKC).

Temperament: The Neapolitan Mastiff is a loyal and natural guardian breed that will protect his family and property. Although he is usually calm, he is also wary and does not like to be disturbed by strangers. This breed is generally good with children, however, there are issues which need to be seriously considered. This dog is massive and could unintentionally knock down and injure a small child. In addition, they are very protective and may become jealous of other children visiting. Neapolitan Mastini are very intelligent and independent thinkers. They must be socialized starting at a very young age and it should be continued throughout their lifetime. Obedience training done in a very positive manner is also a must. An owner needs to always be seen as the ‘pack leader’ and if children are around this breed, they too must be able to show leadership. Neapolitan Mastini are not active dogs, however, they still need daily exercise exercise such as a couple of daily long walks. This breed is not for everyone, however, an owner who knows how to handle and care for this type of dog will enjoy an affectionate, loyal family pet.

Health Concerns:
The Neapolitan Mastiff breed is more prone to some medical issues than other breeds which include: bloat, bone cancer, cardiac disorders, eye problems, and various orthopedic problems. 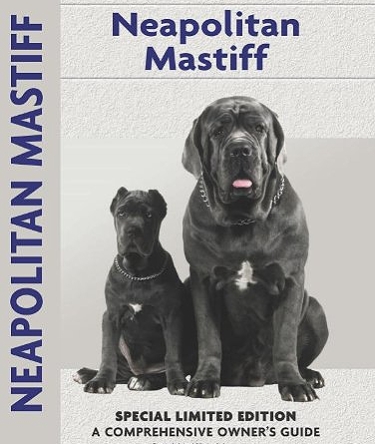