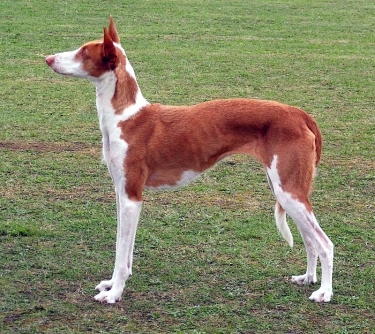 Ibizan Hounds are medium-sized hunting dogs which are elegant, agile, and deer-like in appearance. The hard textured coat which is either a short or wire type has various colors of red and white – solid or in combination. Ibizan Hounds have large, upright ears which are unique to this breed. These athletic dogs were used to hunt rabbit and other small game by sight, sound and / or scent.

Ibizan Hounds are considered by most experts to be an ancient dog with a history dating back to around 3400 B.C. Numerous artifacts uncovered in the tombs of Egyptian Pharaohs closely resemble the Ibizan Hound. In addition, a life size statue of Anubis also known as “The Watchdog of the Dead”, was discovered in 1922 at the entrance of King Tut’s tomb. This statue is an exact match to today’s Ibizan Hound.

It is believed Ibizan Hounds made their way to Ibiza – an island from which the breed takes its name – off the coast of Spain in the Mediterranean Sea. Ibiza was discovered by Phoenicians in the 8th or 9th century B.C.

Ibizan Hounds were imported to the United States by Colonel and Mrs. Consuelo Seoane in 1956 and the breed was recognized by the American Kennel Club (AKC) in 1979.

“The Ibizan Hound Club of The United States is the official AKC parent breed club for the Ibizan Hound. The Club’s roots can be traced back to the mid-1970’s organization, Ibizan Hound Fanciers and Exhibitors of the U.S. Today ICHUS consists of members throughout the world and is dedicated to promoting the qualities and attributes of the Ibizan Hound.” ~ Source: IHCUS

Coat Type: The Ibizan Hound breed has two types of coat – short and wire hair. Both types have a hard texture.

Color: The color of the Ibizan Hound’s coat is of various colors of red and white – can be solid or in combination.

Temperament: Ibizan Hounds have been described as even-tempered, affectionate and loyal. They can be playful and silly. They’re known to be very good with children making this breed an excellent family pet. Ibizan Hounds are intelligent and respond well to positive training. They can be stubborn at times, they’re sensitive and wary of strangers until they get to know them. The Ibizan Hound is alert and makes a good watchdog. Ibizan Hounds have a natural hunting instinct and must be kept on a leash unless in a secure area as Ibizan Hounds will take off (they can also jump very high). Daily exercise such as long walks, a run (especially alongside a bicycle), and retrieving are necessary for this active breed.

Health Problems: Generally a healthy breed, however the Ibizan Hound can be prone to serious issues that can include seizures, deafness, eye disorders and allergies. Average life expectancy of a Ibizan Hound is between 11 – 14 years.

Special Interests:
• Ibizan Hounds were recognized by the AKC as an breed in 1979.
• The Ibizan Hound Club of The United States is the official AKC parent breed club for the Ibizan Hound.
• A female Ibizan Hound is considered a better hunter than the male.
• The Ibizan Hound, also called ‘Podenco Ibicenco’ (‘the dog with the air of the a doe’),
are also sometimes referred to by fanciers as ‘Beezers’. 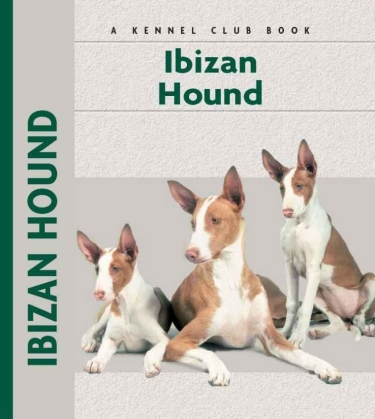