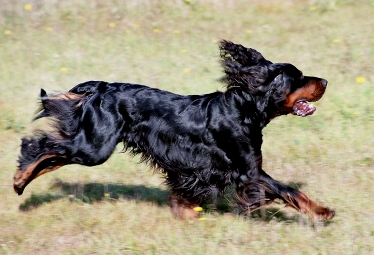 Gordon Setters, initially bred as bird dogs, have ancestral roots dating possibly as far back as the 1600s in Scotland. The Duke of Gordon is responsible for establishing the breed in the 1820s. When two gentlemen by the names of Daniel Webster and George Blunt imported Gordon Setters to America in 1842, they brought with them two dogs which were purchased by kennels owned by the Duke of Gordon. These dogs, Rake and Rachael founded the Gordon Setter breed in the United States.

The Gordon Setter Club of America was organized in 1924 and is dedicated to promoting and preserving the “Beauty, Brains & Bird Sense” of the breed. The American Kennel Club officially recognized the Gordon Setter breed in 1892.

Coat Type: The Gordon Setter’s coat can be straight or slightly wavy (but not curly). The hair is long and silky on the chest, stomach, back of fore and hind legs. Soft, shiny, flat. Regular combing or brushing is necessary – bathing when needed. The Gordon Setter is an average shedder.

Color: The Gordon Setter’s coat is black with tan markings – which is either mahogany or rich chestnut.

Temperament: Gordon Setters are friendly, energetic and intelligent. They make a great family dog as they’re known to be excellent with younger children – very protective of them as well. Gordon Setters are highly spirited, loyal and obedient. This breed is slow to mature (not until around age 3), but learn easily with a gentle, yet firm and calm approach. Owners must also always maintain ‘leadership’ with their Gordon Setter, otherwise these dogs may become stubborn. The breed is needs plenty of vigorous daily exercise. Gordon Setters should never be allowed to roam freely because of their strong hunting instinct which may lead them into traffic. These dogs are reserved with strangers. Gordon Setters are known to be great talkers.

Health Problems: Gordon Setters are generally a healthy breed, although there are some health concerns such as gastric torsion (bloat), hypothyroidism and hip dysplasia – although not as prone as many of the larger breeds. Other health issues that can affect this breed include eye diseases such as progressive retinal atrophy, and cataracts. Life expectancy for the Gordon Setter is generally about 10 to 12 years. 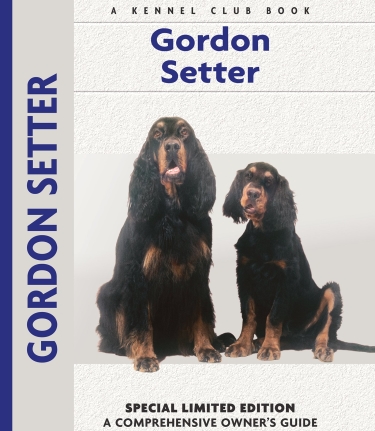