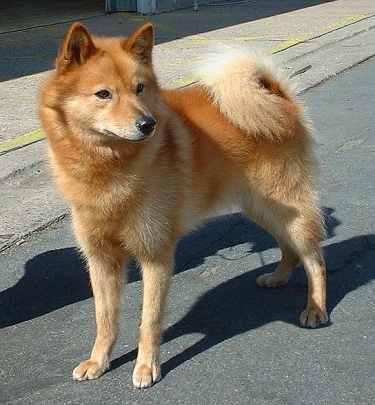 The origins of the Finnish Spitz breed can be traced back thousands of years ago. It is believed these dogs were developed in the region of the Volga River – which is now Finland. However, it has also been claimed these dogs are related to the Russian Laika which is a type of hunting dog of Northern Russia and Russian Siberia.

Coat Type: The Finnish Spitz has a double coat. The inner coat is soft, short and dense and the outer has long, straight, harshly textured guard hairs. Males have a slightly longer and coarser coat than females and also more have more profuse hair at the shoulders. The coat should be brushed weekly and only bathed when necessary. The Finnish Spitz is a natural ‘wash and wear’ dog and trimming is not needed except for under the pads of the feet. Seasonal heavy shedder.

Color: The color of the Finnish Spitz coat can be shades of red-gold from pale honey to dark auburn; may have a white patch on chest.

Temperament: Finnish Spitz are active, friendly, loyal and very intelligent. These dogs interact very well with people including children and make a wonderful family pet. Finnish Spitz can play for hours and are generally good with other pets. It is important to socialize these dogs early so they are not aloof with strangers or reserved. In addition, it is important the owner establishes he is dominant and boss. Training should be firm, but with a gentle voice and owners must be patient. Finnish Spitz respond better to praise than correction. Finish Spitz love to hunt and will chase small animals. These dogs are also known to bark a lot which makes them a good watch dogs. The Finnish Spitz breed is independent and can be stubborn.

Health Problems: Finnish Spitz are generally healthy. Some health concerns include: hip dysplasia, elbow dysplasia, patellar luxation and epilepsy. This breed loves to eat and can easily become overweight which can then lead to health problems. A properly cared for Finnish Spitz can live up to 13 – 15 years. 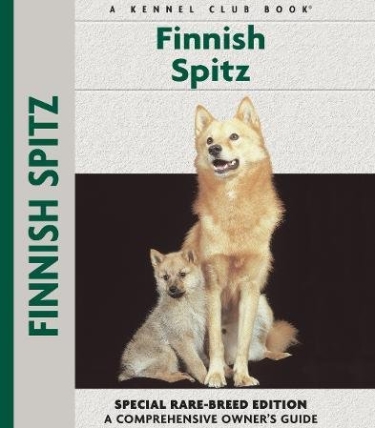