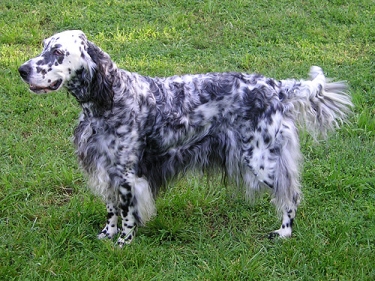 The English Setter is a large, gundog breed with a natural bird instinct. These graceful and friendly dogs are of two types: show and field. Show dogs have a silky, flowing coat while the field dog’s coat is shorter. Overall, the field type is also a bit smaller.

Edward Laverack and R.L. Purcel Llewellin both play a significant role in the development of the present day English Setter. In about 1825, Laverack obtained and mated two Setters “Ponto” and “Old Moll” from Rev. A. Harrison who had kept the breed pure for over 35 years. “Laverack Setters” were specifically recognized for their beauty and refinement and are the base of today’s show dogs. The first show for the English Setter was held at Newcastle-on-Tyne in 1859.

Years later, Llewellin developed from Laverack’s best dogs, a type with excellent field abilities. It is this strain which became the foundation of today’s field type – and is also referred to as “Llewellin Setters”. The Carnegie Museum of Pittsburgh has a statue of the field-trial setter “Count Noble” on display. While there are two different types of English Setters and they can vary in appearance, these dogs are of one breed.

The American Kennel Club recognized the English Setter breed in the Sporting Group in 1884.

Coat Type: The English Setter’s coat is fine, flat, medium or long length (depending upon the type). Feathering on the ears, tail, legs and stomach. Regular brushing and combing will keep the coat in good condition and bathing needed only when necessary. The English Setter is an average shedder.

Health Problems: English Setters are a relatively healthy breed. The following health concerns can affect this breed: hip dysplasia, elbow dysplasia, congenital deafness, and canine hypothyroidism. Setters have few genetic problems but some problems occasionally occur. Cancer is more common in older dogs. Allergies are seen in some lines and include food allergies. These dogs should not be overfed. The average life span of a English Setter is between 10 – 12 years.

Special Interest:
• The Carnegie Museum of Pittsburgh has a statue of the field-trial setter “Count Noble” on display.
• The very first dog registered with the AKC was an English Setter named Adonis in 1878 – this breed was recognized in the AKC Sporting Group in 1884. 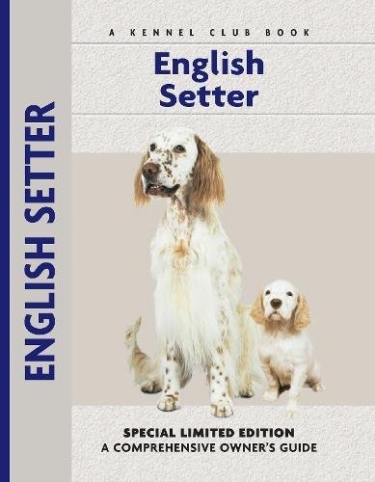