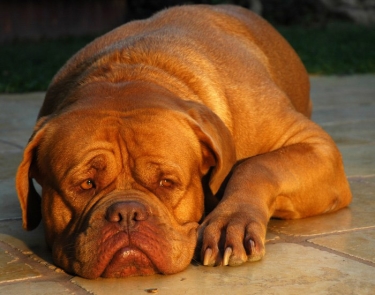 The Dogue de Bordeaux is muscular, powerful, stocky, athletic and structurally built low to the ground. The most distinguishing feature is its enormous head which is believed to be the biggest of all canines. The Dogue de Bordeaux short fine coat can be any shade of red and the color is darker around the muzzle and eyes forming a characteristic mask. The breed was mostly owned by wealthy French as well as nobility and were used to guard, hunt and fight.

In the following twenty years, there were three known varieties of the Dogue – the Toulouse, the Parisian and the Bordeaux – all named after the region from which they came. While these types had several differences from the modern Dogue de Bordeaux such as coat color, size and body structure, there were also many general similarities. Theerfore, in the late 1800s, breeders came together to develop one type for this breed. The first standard was written in 1896, but has changed several times since then.

Both World Wars and the French Revolution put a strain on the survival of the Dogue de Bordeaux breed – particularly WWII when historians tell us Adolf Hitler ordered these dogs executed because of their devout loyalty to their masters.

The first documented Dogue de Bordeaux to enter the United States was in 1959, although it is believed it arrived much earlier in 1890. The Dogue de Bordeaux was fully recognized by the American Kennel Club in the Working Group in 2008.

Weight: The weight of the Dogue de Bordeaux according to AKC Standard should be at least 99 pounds (45 kg).

Coat Type: The Dogue de Bordeaux coat is short, fine and has a soft texture. Grooming of the coat is minimal and requires a brushing once a week. In addition, bathing is recommended every week and a half to two weeks particularly to rid of doggie odor.

Color: The color of the Dogue de Bordeaux coat can be any shade of red.

Temperament: The Dogue de Bordeaux is affectionate, very loyal, devoted and has well balanced disposition. Properly raised Dogue de Bordeaux makes for a great companion and family pet. Training and socialization are extremely important since this breed’s ancient background includes fierce fighting. This is an intelligent breed, and although it can be stubborn, once it learns something, it does not forget. Anyone considering a Dogue de Bordeaux must realize the importance of being the pack leader, dominant, consistent and confident. The Dogue de Bordeaux must be given rules and must obey them. These dogs are fearless, courageous, natural guardians and very keen to notice something out of the ordinary – all traits which make for an excellent watch dog. Dogue de Bordeaux are playful and need daily exercise.

Health Problems: The Dogue de Bordeaux is susceptible to several health issues which includes cancer, heart disease, epilepsy, hip dysplasia, kidney disease, bone / joint problems, obesity and bloat. Notes: This breed does not do well in the heat and exercise should not be strenuous until it is fully mature due to too much stress on developing bones could cause injury. The average life expectancy of a Dogue de Bordeaux is between 8 – 10 years. 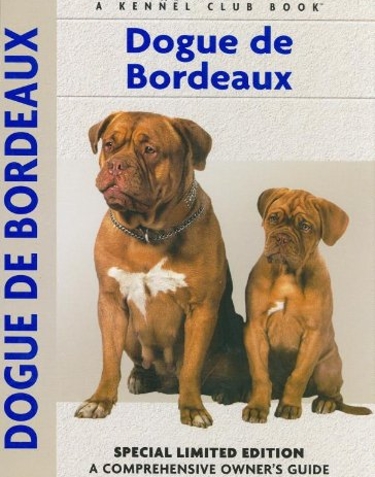