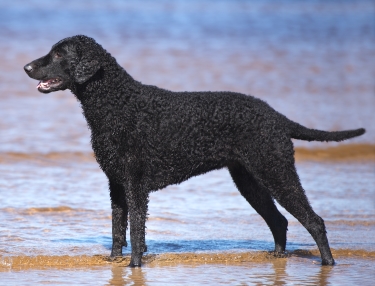 The Curly Coated Retriever was developed in England and is one of the oldest retriever breeds. It is believed to have descended from the 16th century English Water Spaniel, the Irish Water Spaniel and a small Newfoundland type dog. In the 19th century, the breed was then crossed with the Poodle. By the mid 1800s, the Curly Coated Retriever was one of the most popular breeds in England.

The breed was first exhibited at England’s Birmingham show in the mid-19th century. By the end of the 1800s, Curlies were sent to Australia and New Zealand where they also became quite popular.

In the 1900s, it is believed the popularity of the Curly Coated Retrievers was diminished due to word which spread that several atypical Curlies were labeled as a hard-mouthed retriever. This tarnished the breed’s reputation and caused some hunters to choose different retrievers. The truth is that Curlies are actually quite a tender-mouthed retriever.

The Curly Coated Retriever is a large, muscular, athletic dog known to be graceful and elegant. Its stance exudes confidence, agility, strength. Its distinctive water resistant curly coat protects the breed from the elements, particularly from icy waters. Curly Coated Retrievers have muscular limbs, a longer body than its height, small ears and a clean cut tapered head.

Coat Type: The Curly-Coated Retriever’s coat is a distinguishing characteristic of the breed. There is no undercoat and curls are small and tight and protect the breed from harsh elements. Curls also completely cover the ears, neck, thighs, rear legs at least to the hock and the tail. On the face, front of forelegs and feet, the coat is smooth and short. Curly Coated Retrievers don’t shed as much as other breeds and shedding typically is seasonal. The coat is easy to care for.

Color: The Curly Coated Retriever’s coat is black or liver. A prominent white patch on breast is undesirable, but a few white hairs allowable in an otherwise good dog. 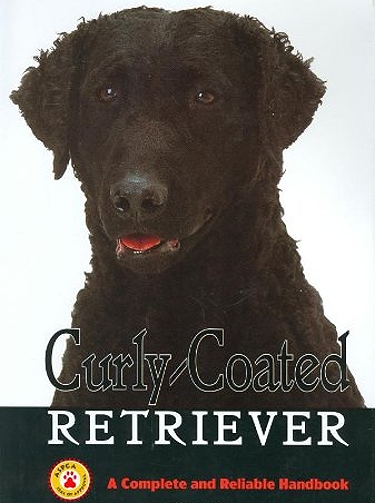