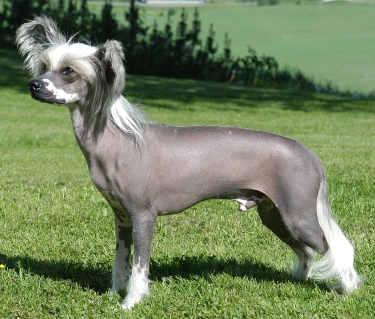 The Chinese Crested is a small dog, no taller than 13 inches and weighing no more than 15 pounds. They’re charming, lively, alert, intelligent and can be trained to perform tricks. The Chinese Crested’s unique appearance is definitely an eye-catcher and conversation starter.

The exact origins of the breed are not known, however, they were favored by the Chinese and traced back to the African Hairless dog. Chinese Cresteds were routinely traded at ports in the Central and South Americas as well as in Asia and Africa as early as the 1500s. They were excellent ratters and commonly used by merchants and sailors.

The Chinese Crested breed became popular in the United States in the early 1900s. They are the AKC’s 132 dog and were first registered in 1991.

Weight: The weight of a Chinese Crested can vary considerably, but should not be over 5.4 kg (12 lbs).

Coat Type: The Hairless variety of the Chinese Crested has soft and silky hair on its head, tail and feet which can be lengthy. Grooming for this variety is more concentrated on protecting the skin where there is no hair. The Powder Puff variety has double coat of long, soft hair. Frequent brushing is recommended due to matting. The Chinese Crested is a very light shedder.

Color: The Chinese Crested can be of any color or combination of colors.

Health Problems: The Chinese Crested is not affected by many of the congenital diseases found in toy breeds. Health concerns include: tooth decay, skin irritations, hypothermia and patellar luxation (knee problems). Another health concern for this breed include two forms of progressive retinal atrophy (PRA). Chinese Cresteds can live up to 15 years or longer.

Special Interest:
• Gypsy Rose Lee had a Chinese Crested in the 1950s. She was a breeder and help publicize the breed.
• Chinese Cresteds were also known as “Chinese Edible Dog” – they were at one time eaten by ancient Aztecs!
•The Chinese Crested breed, either in purebred form or as a hybrid with chihuahua, has won all eight of the previous World’s Ugliest Dog Contests.