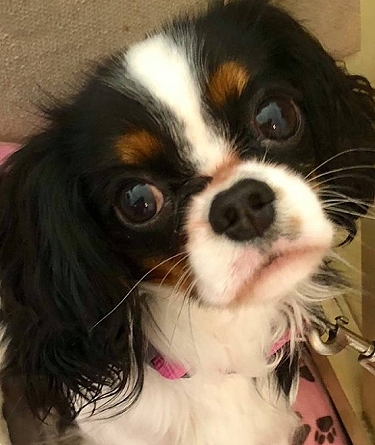 King Charles II was very fond of spaniels and always had two or three with him. He so much favored these dogs that he wrote a decree that which allowed them to be accepted into any public place which included the Houses of Parliament. In England this decree is still in existence today.

Over time, toy spaniels’ popularity faded and was replaced by the Pug. In the 1920s, American Roswell Eldridge traveled to England in search of two ‘old type’ spaniels like those in earlier paintings and tapestries. Initially he was unsuccessful, so he then offered twenty five pounds at the Crufts Dog Show each year to the best male and female which resembled the dogs in King Charles II’s reign. This strategy eventually worked, however, Mr. Eldridge passed away before ever seeing the results.

Coat Type: The Cavalier King Charles Spaniel’s coat is long, silky and soft. No curls although a slight wave is permissible. It grows lengthy feathering on their ears, chest, legs, feet and tail and breed standards demand this be kept long. Feathering on the feet is a feature of this breed. Due to the length of the Cavalier King Charles Spaniel’s coat, it is important to keep it well groomed. To keep the coat from being matted, a daily brushing is recommended.

Color: The Cavalier King Charles Spaniel breed has four recognized colors: 1. Blenheim – rich chestnut on pearly white background 2. Tricolor – black and white with tan markings on cheeks, inside ears, on eyebrows, inside legs, and on underside of tail 3. Black & tan – black with tan markings 4. Ruby – rich reddish-brown all over. 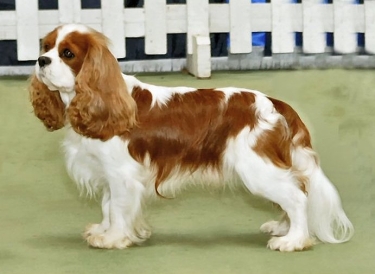 Health Problems: The Cavalier King Charles Spaniel can suffer from two severe and common genetic conditions – mitral valve disease and syringomyelia. Mitral valve disease which is heart disease, is the most common cause of death of the Cavalier. Syringomyelia is an inherited neurological disease which affects the brain and spine. Other health issues include Episodic Falling which is an ‘exercise-induced paroxysmal hypertonicity disorder’ meaning that there is increased muscle tone in the dog and the muscles are unable to relax, hip dysplasia, keratoconjunctivitis sicca (dry eye) and other eye issues such as hereditary cataracts. Additional health concerns include ear problems and a congenital blood disorder.