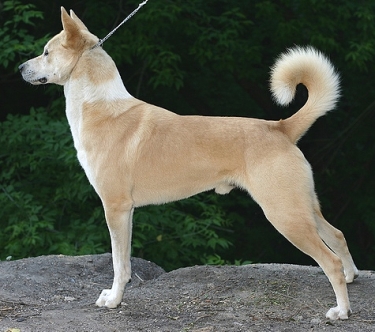 The Canaan Dog is medium-sized, sturdy, squarely proportioned and alert. The breed is native to the Middle East and can trace its lineage to the feral Middle Eastern Pariah dog – which dates back to pre-Biblical times. Canaan Dogs originated in the “Land of Canaan”. There are drawings which were found on the tombs at Beni-Hassan that date back to 2200-2000 B.C. which reveal a striking resemblance to the present day Canaan Dog.

Early on, Canaan Dogs were plentiful in the region and used as herd and guard dogs for the Israelites. After the dispersion of the Israelite people by the Romans over 2,000 years ago, many of these dogs were able to seek refuge in the Negev Desert, a natural reservoir of Israeli wildlife.

In the 1930s, Dr. Rudolphina Menzel was asked to develop a dog which would guard and protect the isolated Israeli settlements as well as to be used in the War of Independence. Dr. Menzel had knowledge of the ‘wild dogs of Israel’ – the Pariah Dog. These dogs were fit, knew their land well and were able to survive hardship. She captured specific Pariah Dog stock from which she developed the Canaan Dog breed.

The first four Canaan Dogs entered the United States on September 7, 1965 with the help of Ursula Berkowitz of Oxnard, California. Her intent was to establish this breed in the US. The same year, the Canaan Dog Club of America was formed and stud book records were kept from these first reports.

AKC: The Canaan Dog entered the Miscellaneous Class in June 1989, and dogs were registered in the AKC Stud Book as of June 1, 1997. The dogs began competing in conformation on August 12, 1997.

Coat Type: The Canaan Dog has a double coat. The outer coat is straight, dense and harsh. Length is short to medium. The undercoat is short, soft and lies close. The amount of thickness depends on the season. The Canaan Dog’s coat does not have a ‘doggie odor’ and is is easy to groom.

Color: The color of the Canaan Dog’s coat ranges from cream to black and all shades of brown and red between, usually with small white markings, or all white with color patches. Spotting of all kinds is permitted, as well as white or black masks. The tail is bushy and curls over the body when the Canaan Dog is excited or alert.

Temperament: The Canaan Dog is intelligent, independent, obedient and a natural watch dog. This breed is very friendly with those he knows, but wary of strangers (even welcomed guests) and will bark a lot if there are any disturbances. The Canaan Dog is easily trained, but can become bored quickly of repetitive exercises. If the Canaan Dog will be around children, early socialization is necessary. The Canaan Dog is an excellent herder and can be aggressive with dogs of the same sex.

Health Problems: Canaan Dogs are a healthy breed and do not suffer from any known hereditary problems. However, these diseases have been seen from time to time: epilepsy, hypothyroidism, hip dysplasia, cryptorchidism, progressive retinal atrophy (PRA), osteochondritis dissecans (OCD). The average life expectancy for a Canaan Dog is 12-15 years.

Special Interest:
The Canaan Dog is native to Israel and dates back to 2000 B.C.