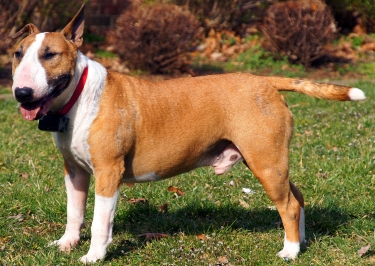 Bull Terriers are thick set, muscular and have a most recognizable feature – an ‘egg-shaped head’. These dogs are playful, intelligent, friendly and protective – yet – they were developed from the “Bull and Terrier” crosses which were originally bred for dog-fighting in the early 1800s.

It wasn’t until the early 1860s, the breed we know today was developed by James Hinks of Birmingham, England who crossed existing Bull and Terriers with his own white Bulldog (Madman) and White English Terriers which are now extinct. The result was an all white dog. The colored version of this breed was not developed until the early 1900s when Bull Terriers were crossed with Staffordshire Bull Terriers.

In 1887, the first Bull Terrier Club was created in England and the breed was recognized by the American Kennel Club in 1895. The AKC recognized two different sizes, the Standard Bull Terrier and the Miniature Bull Terrier in 1991.

Color: The color of the Bull Terrier’s coat is white (although markings on the head are permissible), any color other than white, or any color with white markings.

Temperament: The Bull Terrier is friendly, fun-loving, sweet natured, intelligent and playful. Bull Terriers are protective and they make a formidable guard dog. This affectionate and energetic breed loves to be with family. Bull Terriers are good with children, but not necessarily so with younger kids due to their strength meaning they could inadvertently cause injury. Bull Terriers must be thoroughly socialized and trained. They should not be left alone for long periods at a time. The Bull Terrier does not bark, unless it is for good reason.

Health Problems: The Bull Terrier can be prone to deafness (some are born deaf), skin allergies caused from fleas, mosquitoes, and mites. Other concerns include obsessive compulsive behaviors such as tail chasing and obsessive licking. Weight gain for the Bull Terrier can be also be a concern. Average life span of this breed is between 10 – 14 years. 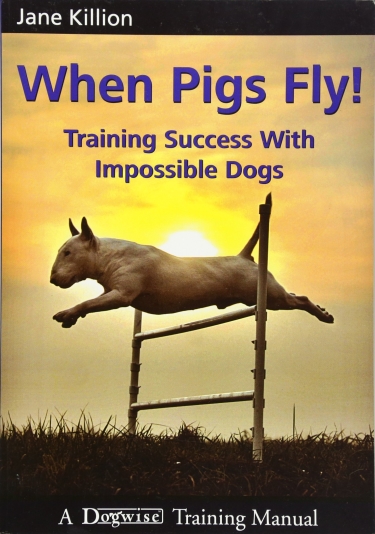