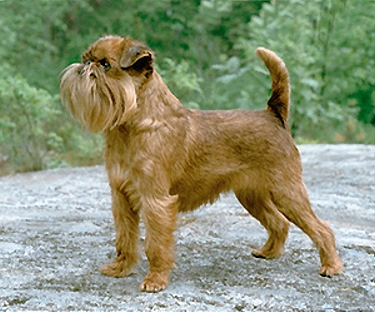 The Brussels Griffon is a small dog with notable features such as a flat face, prominent chin and large, wide-set eyes which remind people of a small monkey or an elf. This breed also resembles a small terrier.

The history of the Brussels Griffon began in the 1800s in Belgium. These dogs were originally used in stables to keep the rats away. It is believed the Brussels Griffon was developed from the Affenpinscher and a Belgian street dog, often referred to as the “griffon d’ecurie” which means wire-coated stable dog. Records indicate the Pug and the King Charles and the Ruby Spaniels were crossed with the original Belgian dog. As a result, two distinct types of coat emerged, the rough coat and the smooth coat.

Coat Type: The Brussels Griffon has two different types of coat – rough and smooth. The rough coat is dense and wiry and should never never look or feel wooly. The hair around the face forms a fringe around the eyes, nose, cheeks and chin – however this hair should not be grown into a long beard. The eyebrow, moustache and beard look is essential to the human-like expression sought after in the Brussels Griffon. The smooth coat is straight, short, tight and glossy, with no trace of wiry hair. The Brussels Griffon’s coat is groomed with a technique known as stripping. This involves pulling out the dead hair by hand. If the coat is left to grow naturally it will become soft and wooly looking.

Color: The color of the Brussels Griffon’s coat can be red, a mixture of red-brown & black, black & tan, and solid black.

Health Problems: Possible health concerns which may affect the Brussels Griffon include slipped stifle, respiratory difficulty, eye lacerations, and heatstroke. The average life span is between 12 to 15 years. 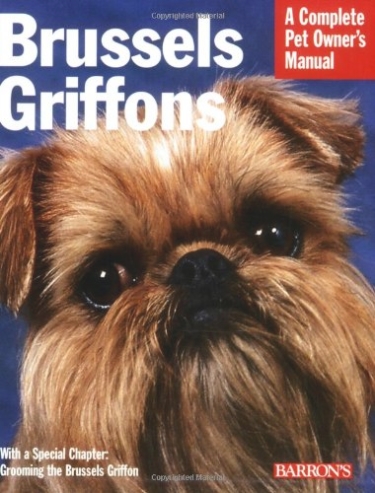