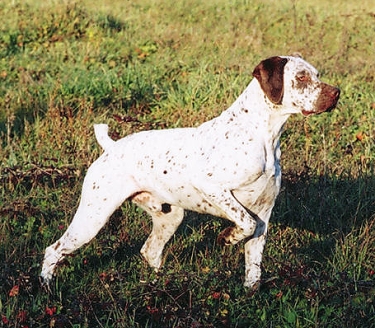 Developed during the 16th century, the Braque du Bourbonnais or Bourbonnais Pointing Dog is a breed of gun dog, sometimes born with a short tail, with a coat ticked with liver or fawn.

The breed nearly became extinct after World War Two. From 1963 – 1973, there were no new Braque du Bourbonnais registered in the French stud book (LOF)

In 1970, hoping to revive the breed, Michel Comte sought out dogs that had some Bourbonnais blood. He found only mixed breed dogs which had some characteristics, but, after experimenting with inbred litters, Comte finally registered his first Bourbonnais in the LOF in 1973, 1974, and 1975, and the breed prospered.

Special Interest:
• The United States is the second producer of Bourbonnais after France.
• One of the oldest breeds of French Pointers.