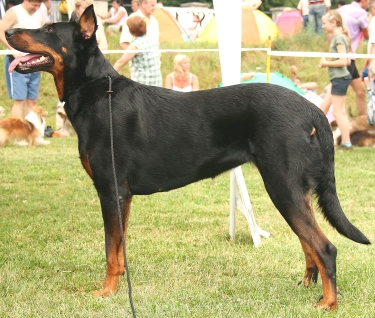 The Beauceron is a large, powerful and well-muscled herding dog developed solely in France. The earliest documentation of its existence (it is believed) dates back to a Renaissance manuscript of 1578. Another report related to the Beauceron dates back to 1809 when the Abbey Rozier made mention of ‘plain dogs for guarding flocks and herds’ in an article. However, it was not until 1863 these dogs were truly identified.

The Beauceron breed is used extensively on farms in France. This hard-working breed can guard and herd large flocks of sheep without showing signs of exhaustion. During war-time in Europe, Beaucerons were used for various tasks such as detecting mines, running messages, locating the wounded, picking up trails, etc. The Beauceron is still used today by the French police and army and they are considered a great companion as well as very protective watchdog.

Coat Type: The Beauceron has a double coat. Outer coat is coarse, dense and lies flat. The length approximately 1¼ inches. The Beauceron’s undercoat is dense and wooly. An occasional grooming is needed – usually when shedding. The Beauceron is an average shedder.

Color: Standard colors for a Beauceron’s coat: black and tan as well as black, tan and gray.

Temperament: The Beauceron is gentle, friendly, and highly intelligent. It is also known to be protective and fearless. The Beauceron does very well with obedience training and it is eager to please its master. It does well with children if trained and socialized correctly -and- starting at a very early age. Beaucerons enjoys plenty of exercise. This is a breed that does not like to be left alone for a long period of time. The Beauceron is wary of newcomers and does not do well with other dogs they do not know.

Health: The Beauceron is generally a healthy breed, however, they are prone to hip dysplasia and bloating. The average life span of a Beauceron is 10 – 13 years.

Special Interests: The Beauceron is a breed of the lupoid (wolf-like) type.
While the Beauceron is an old and distinct breed originating in France as a herding dog, it is relatively unknown in any other country. 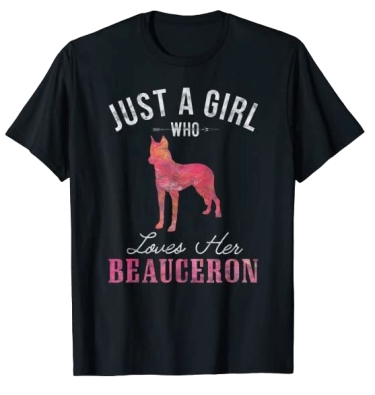