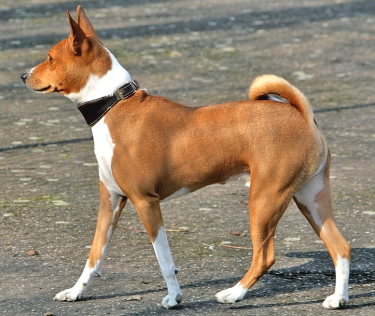 Description: The Basenji is one of the most ancient breeds dating back to the pharaohs. This sleek and elegant breed can be found in Egyptian tombs and wall drawings dating back thousands of years ago. Also known as the “Congo Dog”, they were originally bred for hunting small game by coursing.

When Egypt fell, the Basenji breed became scarce. It is possible these dogs were given up when Egypt lost a war against Sudan and valuable items such as dogs were turned over along with precious metals and women.

Basenjis were first exported to England in 1895, but they perished due to distemper. In 1937, another attempt to England was made while a pair of dogs were also exported to the United States. There was only one survivor from the litter produced by this pair in the US – a male named Boris. In 1941, a female was imported and was mated with Boris. And, together, they produced the first American litter of Basenjis.

The name Basenji means “small wild thing from the bush”.

Coat Type: The Basenji has a short, smooth, shiny and very fine coat. Grooming is minimal. Very light or no shedding. The Basenji cleans itself the same way a cat does. Ideal for an owner with allergies.

Color: Acceptable colors for the Basenji’s coat include: chestnut red; pure black; tricolor (pure black, chestnut red and white); and brindle (black stripes on a background of chestnut red); all with white feet, chest and tail tip. White legs, blaze and collar are optional. White should not dominate the primary color.

Temperament: The Basenji is alert, playful, energetic and curious. It is independent, yet also affectionate and does not like to left alone for long periods. This breed doesn’t bark, but makes a sound like a mix of a chortle and yodel. These dogs should not be trusted with non-canine animals and their owner should be aware of their climbing abilities which enables them to easily climb chain wire fences. The Basenji does best with older, good children. They like to chew, so its owner should give them plenty of toys. The Basenji can be reserved with strangers. It does well with training and is eager to please its master.

Health Problems: According to results from a 2004 UK Kennel Club survey, many Basenjis suffer from PRA, which causes blindness and Fanconi’s syndrome – an inheritable disorder in which the kidneys fail to reabsorb electrolytes and nutrients. This can cause kidney failure. The most common health issues noted by owners were dermatological and urologic. Other health issues include hip dysplasia, resulting in loss of mobility and arthritis-like symptoms and malabsorption, or immunoproliferative enteropathy – an autoimmune intestinal disease that leads to anorexia, chronic diarrhea, and even death.

Special Interests:
• The Basenji is known as the “barkless dog”.
• The Basenji cleans itself like a cat and does not have a ‘doggy odor’.
• The first specimens of the Basenji were brought from the source of the Nile as presents to the Pharaohs of ancient Egypt.
• The Basenji is used in Africa as a guide in the forests to warn of the approach of dangerous animals. 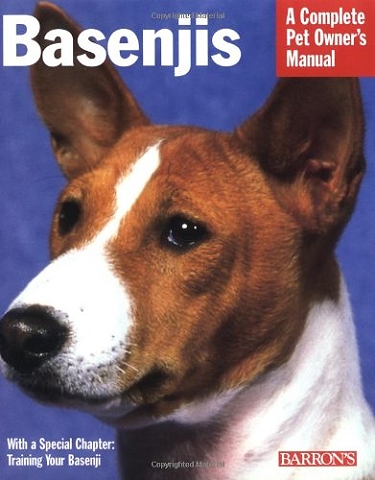