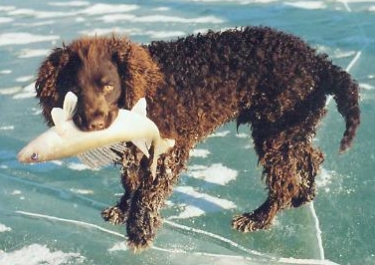 Description: The American Water Spaniel is a medium size dog with a coat of curls and waves. The breed originated in the late 1800s, but its exact origins are unknown. Experts however, believe it was probably developed in the Fox and River valley region of Wisconsin.

The American Water Spaniel is thought to be one of five breeds which originated in the United States and there is no dispute it was developed as a hunting dog. Hunters were in need of a dog that could work on land as well as in the marsh, one that could easily fit in canoe or skiff and a breed which had a thick, warm coat which would keep the dog protected in harsh weather.

Height: The height for an American Water Spaniel is between 15-18 inches (38-46 cm) at the shoulder.

Coat Type: The coat of the Ameican Water Spaniel is curly and can range from regular, continuous waves (marcel) to closely curled. These waves or curls can vary on the different areas of the dog’s body. Texture and density should be adequate to protect against elements such as cold weather, water, etc. The American Water Spaniel’s coat should not be too coarse, nor should it be too soft.

Color: The color of the American Water Spaniel’s coat can be liver, brown or dark chocolate. A small amount of white on chest or toes is permissible. These spots become smaller in size as pup grows to adulthood.

Temperament: The American Water Spaniel is friendly, loving, intelligent and energetic. This breed – like the Spaniel – is an enthusiastic hunter, although it does not need to hunt to be happy. It is eager to please and protective of its owner. He does very well with training, but harsh training techniques can have a negative impact resulting in aggressiveness or shyness as an adult. Consistent and fair training is very imperative. The AWS makes a good companion and is usually excellent with children, however, if he is startled or harshly disciplined, he could bite our of fear.

Health Problems: There are a few health concerns which from time to time affect the American Water Spaniel such as cardiac abnormalities, allergies, cancer, hip dysplasia, hypothyroidism, diabetes, follicular dystrophy, cataracts and epilepsy. It is recommended for any breeder to obtain health clearances to be able to provide to future American Water Spaniel owners. The average life span is between 12 and 15 years. 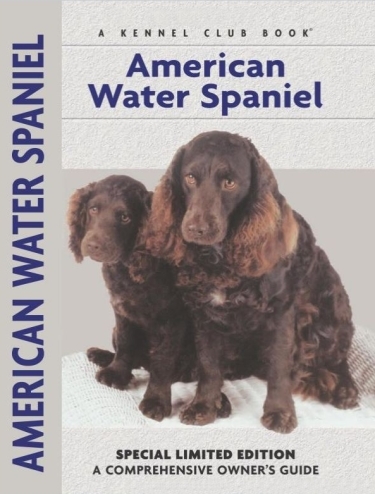