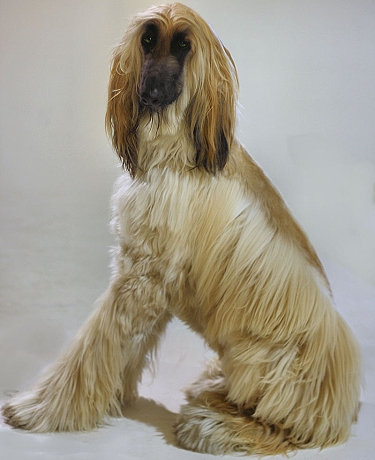 Description: The Afghan Hound, referred to as “The King of Dogs”, is one of the most ancient dog breeds. Recent DNA research has revealed the Afghan Hound dates back for many thousands of years.

The people of Afghanistan refused to sell the breed to outsiders which is why it wasn’t until the 19th century it was discovered by the Western world. Not much is known about the Afghan Hound’s origin, but one theory suggests the breed existed in Egypt thousands of years ago and another says it evolved on the steppes of Asia and was the original sighthound. Neither theory has ever been confirmed.

The Afghan Hound’s features are unique. It is covered in long, thick, silky hair and has a tail with a ring curl. The eyes are almond shaped and dark in color; hipbones are high. Mature dogs have a smooth, shorter-haired saddle. The Afghan Hound’s long and silky topknot is one of its most striking features

The breed was originally used as a coursing hound (refers to the sighthound group) which pursued a varity of game such as hare, wolves, marmots, foxes, snow leopards and gazelles.

Its original native name, Tazi, betrays its connection to the very similar Tasy breed of Russia. The close proximity of southern Russia and Afghanistan makes a good argument for a common origin for both breeds.

Coat Type: The Afghan Hound has a very long and thick with a fine, silky texture on the fore and hindquarters ribs and flanks. The hair from the shoulders backwards and along the saddle should be short in mature dogs. This creates a smooth back which is a traditional characteristic of the Afghan Hound. A striking characteristic of this breed is a long, silky topknot. The hair is short on the face. The ears and all four feet are well covered. Caring for the coat can be difficult. Special grooming tools are needed for proper grooming since the more you brush it, the more it becomes matted. Trimming the coat is not recommened; it is best to let it grow long and beautiful.

Color: All colors acceptable for the Afghan Hound. Color combinations are pleasing, although white markings – specifically on the head are not desired.

Temperament: The Afghan Hound is energetic, dignified, free-spirited. Known to be independent and aloof with a keen fierceness. It is not uncommon for an Afghan Hound to ignore commands at times which makes proper training a must. It’s best to socialize this breed at a young age, otherwise, they can be very shy and aloof towards strangers.

Health: The average life span of an Afghan Hound is 12 years. In 2004, the UK Kennel Club conducted a survey which indicated the most common causes of death were cancer (31%), old age (20%), cardiac (10.5%), and urologic (5%). The Afghan Hound is among the breeds which are most likely to develop the rare disease chylothoraxalso, which is an accumulation of chyle in the thoracic cavity. Allergies are a major health issue and the Afghan Hound is sensitive to anesthesia. This is common in the sighthound group because of relatively low levels of body fat.

Special Interest:
• During WWI, the Afghan Hound breed literally disappeared in the Western world. Todays Afghan Hounds dates back to 1920 when Major & Mrs. G. Bell Murray and Miss Jean C. Manson brought to Scotland a group of Afghans they had acquired or bred during an eight-year stay in Baluchistan. At the time, Baluchistan was an independent state south of Afghanistan, but today it is part of Pakistan.
• It was not until 1926 the Afghan Hound first appeared in the United States and in 1940, the Afghan Hound Club of America was admitted to AKC membership and held its first specialty show.
• The Afghan Hound is the first dog in history to be cloned. 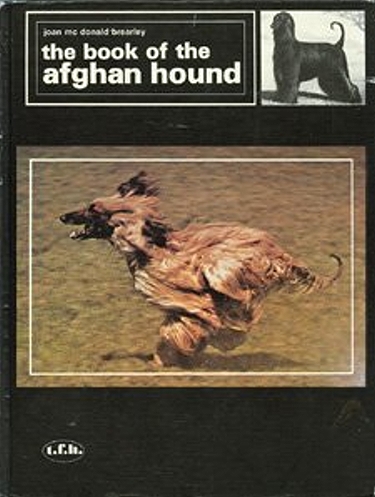 Book Of The Afghan Hound