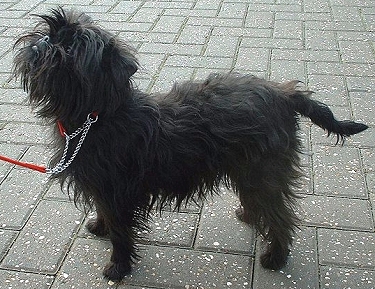 The Affenpinscher has been known in Europe since at least the sixteenth century and is quite often referred to as a ‘mischievous little monkey’. The name of this breed has been translated to monkey dog, monkey-like terrier and monkey mutt. Initially, its role was that of a ratter used in kitchens, granaries, barns and stables, but then later became quite popular and desired by film stars and socialites. They were even depicted in artwork.

While small in size, the Affenpinscher is a sturdy and confident breed which shows no fear toward any aggressor. The breed which originated in Germany predates and is ancestral to the Griffon Bruxellois (Brussels Griffon) and Miniature Schnauzer. The American Kennel Club recognized the Affenpinscher in 1936 and today it remains among the rarest of the accepted breeds.

Coat Type: The Affenpinscher’s coat is dense, rough, harsh and wiry. The coat measures about 1′ on the shoulders and body and may be shorter on the rear and tail. The hair on the head, shoulders, chest, stomach and legs is shaggier and less coarse. The Affenpinscher is known to have a monkey-like appearance due to the way the longer hair on its head and eyebrows frames the face. Grooming is minimal in order to keep the various lengths blended and while shaggy, it still has a neat appearance. The hair on the ears is cut very short.

Color: FCI and UK breed standards specify the Affenpinscher’s coat must be black. However, AKC accepts black, gray, silver, red, black and tan, or belge (a mixture of red, black and white hairs). Blacks may have a rusty cast or a few white or silver hairs mixed with the black. Red Affenpinschers may vary from a brownish red to an orangey tan. The presence of a small white spot on an Affenpinscher’s chest is not penalized, however, larger white patches are considered undesirable.

Temperament: The Affenpinscher is active, curious, playful and a loving companion. They can also be stubborn; therefore, firm and consistent training is necessary. They are loyal, affectionate and protective toward family members. If threatened or attacked, they can become overly excited and show no fear toward any aggressor. Because they are territorial over their food and toys, they’re generally not suited for small children.

Health Problems: The average life span of an Affenpinscher is between 12 and 14 years. Health concerns include: tracheal collapse, hip dysplasia, Von Perthes Disease and Luxating or Slipping Patella.

Special Interest: These entertaining dogs can be found in the works of Durer, Eyck and Charles Verlat. The Affenpinscher was also portrayed in Auguste Renoir’s paintings. In the late 1800s, this delightful breed became desired by famous film stars and socialites. They were also featured on postcards. Mrs. Evalyn Walsh McLean, owner of the Hope Diamond between 1911 and 1947, favored her Affenpinschers so much it was rumored she often attached the famed Diamond to their collar! 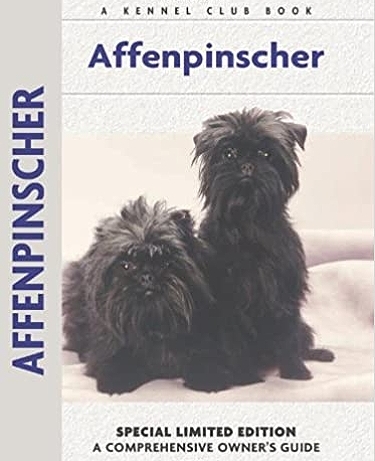